Elizabeth Jane Howard, CBE, FRSL (born 26 March 26, 1923) who was married to the well-known Loch Ness seeker Sir Peter Scott, and later went on to be a famed English novelist, died on January 2, 2014.  She was 90. She had previously been an actress and a model.

In 1951, she won the John Llewellyn Rhys Prize for her first novel, The Beautiful Visit (1950). Six further novels followed, before she embarked on her best known work, The Cazalet Chronicle, a family saga set in wartime England. The first four volumes were published between 1990-1995: The Light Years, Marking Time, Confusion, and Casting Off, with the fifth, All Change, published in 2013. The first two works were serialised by Cinema Verity for BBC Television as The Cazalets.

Howard wrote the screenplay for the 1989 movie, Getting It Right, based on her 1982 novel of the same name and directed by Randal Kleiser. 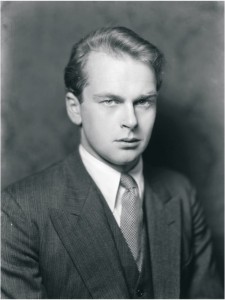 Her adventures with the future co-founder of the World Wildlife Fund (WWF; now the World Wide Fund for Nature, Scott served as its first Chairman, 1961-1982) and future Loch Ness Monster cryptozoologist would be her first marriage. Elizabeth Jane Howard, then 19, married Sir Peter Scott in 1942 (top photo).  They had a daughter, Nicola (born 1943).

Peter Scott was the Director of the Loch Ness Phenomena Investigation Bureau Ltd, 1961-1977. He died in August 1989. 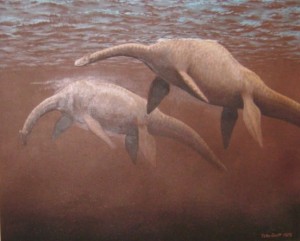 Scott was well-known for this painting of how he envisioned the Loch Ness Monsters. 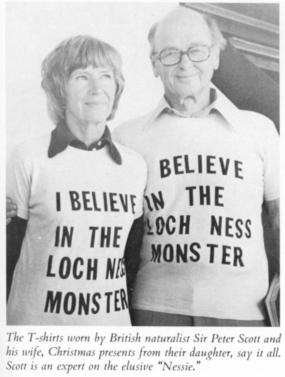 Howard’s marriage to the older Scott did not last long. Here’s how the New York Times details this time:

As a teenager Ms. Howard trained as a stage actress; at 19, to escape her parents, she married the naturalist Peter Scott, a son of the famed Antarctic explorer Robert Falcon Scott.

Ms. Howard’s youth — her husband was in his 30s — seemed to doom the marriage from the start. That she engaged in a series of affairs, one with her husband’s half brother, did not help.

She soon left her husband and their young daughter, obtained a divorce and began work on her first novel, The Beautiful Visit. Published in 1950, it centered, like many of her later books, on a young woman’s desire to be loved and understood.

Ms. Howard was a great beauty, with golden hair and chiseled features, and these years, her memoir recounts, were a dizzying amatory whirl — with the likes of the critics Cyril Connolly and Kenneth Tynan, the journalist Arthur Koestler and the poet Cecil Day-Lewis, father of the actor Daniel Day-Lewis.

Many lovers treated her badly. Among them, Ms. Howard wrote, were Koestler, who forced himself on her and, after she became pregnant, insisted she have an abortion, and Day-Lewis, who, she later said, wrote “a lot of rather bitter poems” in the wake of their affair.

Howard began writing professionally in the late 1940s, not long after her first marriage to the naturalist, Sir Peter Scott, ended.

This was the first of three marriages, her third, and longest, being to the author Sir Kingsley Amis.

A noted beauty, she left Scott (who was 13 years her senior) in 1947 after she had a series of affairs.

She lived apart from her daughter, who she described as “a beautiful stranger,” spending her time in a London flat where she attracted the attention of a series of lovers.

Howard left Scott in 1946, and they were divorced in 1951. At this time she was employed as part-time secretary to the pioneering canals conservation organization the Inland Waterways Association, where she met and collaborated with Robert Aickman on the story collection, We Are for the Dark (1951).

Her second marriage, to Jim Douglas-Henry in 1958, was brief. 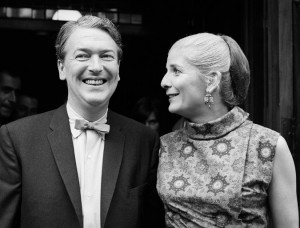 Her third marriage, to novelist Sir Kingsley Amis (shown above, left), lasted from 1965 to 1983; for part of that time, 1968–1976, they lived at Lemmons, a Georgian house in Barnet, where Howard wrote Something in Disguise (1969). Her stepson, Martin Amis, has credited her with encouraging him to become a more serious reader and writer. She lived in Bungay, Suffolk and was awarded a CBE in 2000. Her autobiography, Slipstream, was published in 2002. She died, aged 90, at home on 2 January 2014.

by Loren Coleman on January 12, 2014 in Loch Ness Monster, Men in Cryptozoology, Obituaries, Women in Cryptozoology
Previous Entry: Soldier of Fortune: Mothman Sightings Were Merely Green Berets
Next Entry: Media Comes to Aid of the Museum