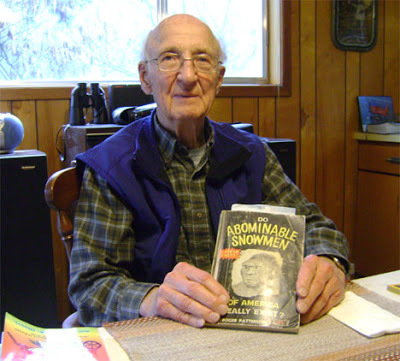 Steve Paine, a local community organizer, shared the news through Bigfoot Books’ Steven Streufert that Willow Creek “lost a wonderful member/founding father of our community! Al Hodgson passed on this wondrous morning as if by his own choice! Al has been suffering a steady decline in recent years which has been comforted by the total commitment and care of his son Mark! I am thankful that I spent a few hours with the two of them this past Friday! The water district, fire department, Bible Church, and the community as a whole have lost a father, mentor and leader! God Bless you Al!” 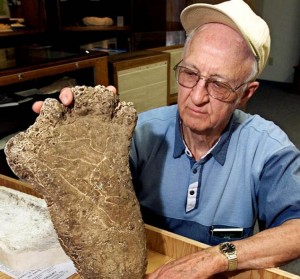 Hodgson had for many years been a volunteer at the Willow Creek-China Flats Museum, telling visitors of the many stories he knew of the early days of Bigfooting.

But long before those relatively recent periods of helping out at the Museum, Hodgson had been a figure that would talk to travelers from away exploring the area for Bigfoot information. He ran Hodgson’s Department Store, and that served as his base of operations.

It was in August 1975 that I first met Al Hodgson, when I stopped by Willow Creek, on my cryptozoological trek from California to New England by car. There was Al, at his store, friendly and sharing what he knew of Bigfoot with a stranger interested in the topic. 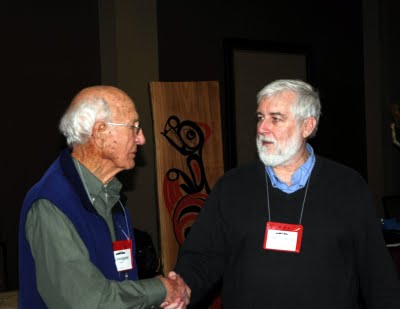 Years later, needless to say, when I met him again at John Green’s 2011 tribute conference in British Columbia, I thanked Al for his generous welcome to Bigfoot country. Now, along with Green, John Bindernagel, and so many others, Al Hodgson is gone too. 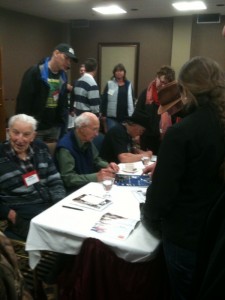 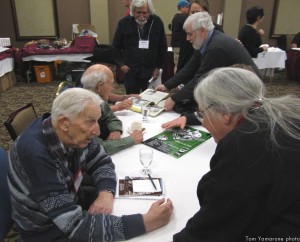 Around the table, John Green, Al Hodgson, behind Al is Bob Gimlin, Richard Klyver, Loren Coleman, and Joyce Kearney, April 8, 2011. Photos above and below, by Tom Yarmarone. 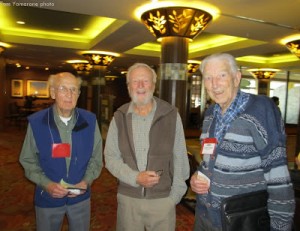 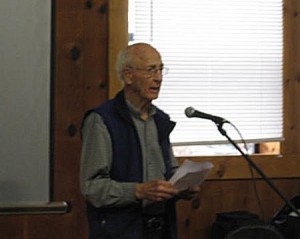 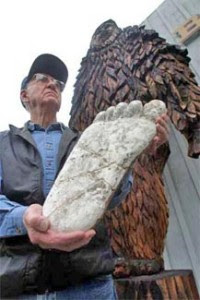 Al Hodgson at the museum. 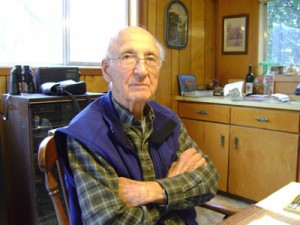 In 2010, Steven Streufert shared these words about Al Hodgson:

“Bigfoot Books and our associate and soundman ”C.I.” went up the hill and around the corner, about a quarter of a mile from the book shop, and visited Bigfooting elder statesman, Al Hodgson. He’s lived in Willow Creek since 1933 (and was born before that!). Now in his mid-eighties, he was there on the ground when ‘Big Foot’ went from being a local legend to an international sensation. In fact, he played an instrumental role in that crucial period of 1967, and made the phone call that brought Roger Patterson and Bob Gimlin to Bluff Creek, leading to the famous filming of the creature. He was prominent as a local contact for all matters Bigfooty for decades, and participated in the early investigations of footprint finds and sightings. He knew Jerry Crew, who made the famous Bluff Creek casts of 1958, personally. As a member of the Willow Creek-China Flat Museum he was the guy who made the famed ‘Bigfoot Collection’ wing happen, thus preserving the Bob Titmus materials and casts, and presenting other archival and historical materials in a domain accessible to the general public curious about Sasquatch evidence and history.” 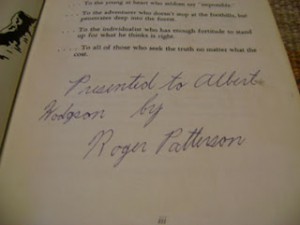 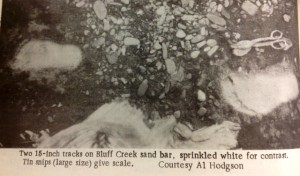 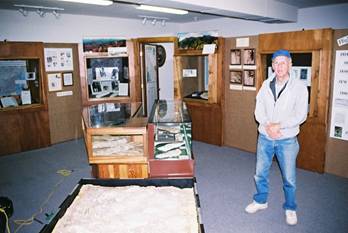 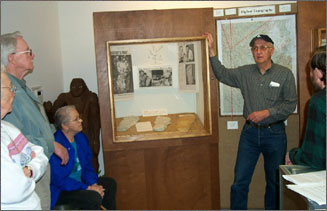 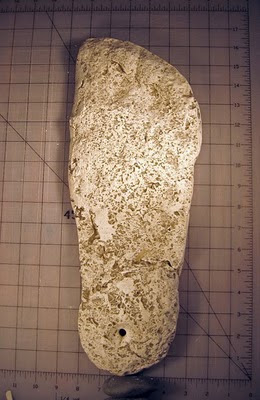 Here is Cliff Barackman’s passage on that cast: 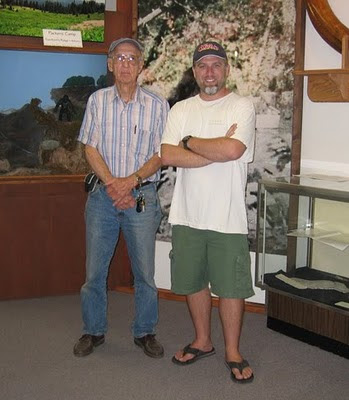 In August of 1963, Al Hodgson saw his first set of footprints in the ground which ended up convincing him that there really was something to the “Bigfoot” rumors that had been circulating in the area since 1958. He and Betty Allen, one of the earliest chroniclers of Bigfoot sightings, drove to Bluff Creek to observe reported footprints and to possibly cast one. Ms. Allen needed a ride, and was concerned about going to the site alone due to the Native American stories about abductions of women by Bigfoot. Interestingly, Al and Betty actually cast that footprint (rarely shown in the Bigfoot literature) which is now on display at the Willow Creek-China Flat Museum in Willow Creek, CA.

In October of 1963, Al Hodgson found another set of tracks at a location called the “Bluff Creek Sandbar.” At the time this sandbar was a short distance from the confluence of Bluff and Notice Creeks, but would later be washed away in the terrible flood of December 1964. 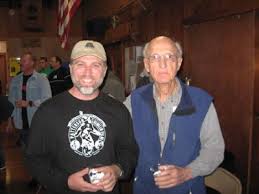 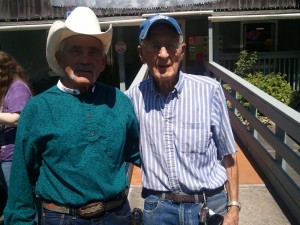 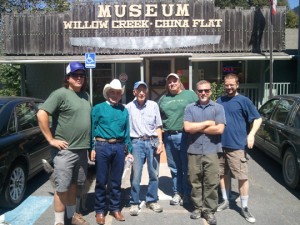 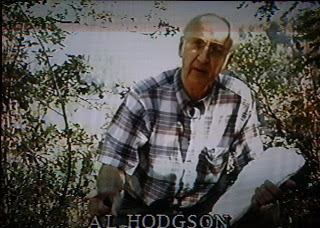 Al Hodgson rarely appeared in television documentaries about Bigfoot, but he was interviewed for the television series Ancient Mysteries (1994), hosted by Leonard Nimoy. 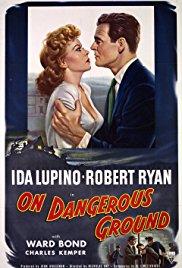 Hodgson also is seen in the 1951 film, On Dangerous Ground, as the uncredited “man walking on snowy hill.” That motion picture starring Ida Lupino and Robert Ryan is about a “rough city cop Jim Wilson [who] is disciplined by his captain and is sent upstate, to a snowy mountain town, to help the local sheriff solve a murder case.”

Al Hodgson was proceeded in death by his wife, Francis Elifritz, born February 16, 1929 in Pakota, Illinois. The following extract from her obituary gives rather complete information on Francis and Al Hodgson’s life together and their running of their store:

[Francis Elifritz] “lived in Norris City, IL for a time and later moved to Albion, IL where Frances finished High School. After High School she attended Business College in Evansville, Indiana. Returning to Albion she met her future husband Albert “Al” Hodgson. Al & Frances were married August 26, 1949 at the Edwards County Fair in Albion, IL. In 1952 they moved out to California where most of Al’s family was currently living. For a short time they lived in Santa Rosa eventually ending up in the Eureka/ Arcata area of Humboldt County. In 1954 Frances experienced her first earthquake. After the birth of their first son, Mike, they decided to build a house on property given to them by Al’s parents on the Hodgson Ranch in the Willow Creek area. About the time of the birth of their second son, Mark, they we’re in the process of opening their new store Willow Creek Varity. Frances operated the store while Al worked as a millwright for Carolina Cal, a local plywood mill near Salyer. Around 1960 they moved the store across the street (Hwy 299) to a larger building. From that point forward Al & Frances operated the store full time together. The store was flooded with 4 to 6 inches of water and mud in the 1964/65 flood due to a creek overflowing its banks and the mountain behind the store siding down up against the back of the building. Life changed quickly for the young family as electrical power was out for weeks and the new home was entirely electric with the exception of a wood fireplace in the living room. The family lived in the living room until power was finally restored. Frances cooked all the family means in the fireplace using a cast iron Dutch oven. Shortly after the flood property was obtained on the west end of Willow Creek on the north side of Hwy 299. A new much larger building was built to accommodate the growth of the store. In the mid-eighties the building was remodeled and a new section added to enlarge the store to the building you see today now home to the Willow Creek Family Health Center. The store was renamed at the time of the remodeling to Hodgson’s of Willow Creek and became a Ben Franklin franchise store allowing Al & Frances to carry an extended line of merchandise. The store was a big part of Frances’ life. While she took pride in the entire store there were two departments that she enjoyed most, Women’s Clothing and the Arts and Crafts. Frances and Ginger Burchard would travel out of the area on buying trips each year to purchase new lines of clothing for the store. Always attempting to find and purchase fashionable women’s clothing. The store had many hard to find items and customers came from all around the Klamath-Trinity Valley Area to shop. Many customers came from the coast often times commenting that the store carried merchandise that was hard to find elsewhere. Over the years there were many wonderfully talented and loyal employees two of which were Virginia North and Ginger Burchard. Virginia and Ginger worked for Al & Frances for many years and stayed with them right up till the end when the store was closed at the end of the year in 1995. Another big part of Frances’ life was her church. She was a member of the Willow Creek Bible Church and was involved in many church related activities such as Sunday School, Vacation Bible School and Christian Women’s Club. Frances often times would pickup or make arranges for kids to come to Sunday School and Vacation Bible School. In the days since Frances’ passing the family has heard many wonderful stories of how Frances touched their lives. Frances was also involved in Soroptimist International and the Willow Creek Fire Bells. She was one of the original organizers of the annual Bigfoot Daze celebration and generally active in her community. Frances is survived by her husband of 61 years Albert Eugene Hodgson, her son, Michael Hodgson and his wife Susan of Saratoga and their two children Nickisa and Kevin. She is also survived by her son Mark Hodgson of McKinleyville, her brother’s children Patrick Elifritz of Bokoshe, OK; Cathy Warren of Red Bluff, CA and her children Phillip, Michael, Kelly and Cameron; Kelly Marshall and her husband Carson of Oklahoma City, OK and daughters Tina and Amber and their son Carson III; and John Elifritz of Fulton MO. Frances loved Mike’s wife Susan as the daughter she never had. She very much loved her granddaughter Nickisa and her grandson Kevin. All of them had a very special place in her heart. Frances’ brother Jim died at the early age of 37 from complications related to an accident on an oil rig several years earlier. This death left 4 young children without a father who needed their daddy very much. While Frances couldn’t replace their Father she showed them love and devotion and tried to be part of their lives whenever possible. She loved each and every one of them and their children as well who were more like Frances’ grandchildren than nesses and nephews. Frances was the last surviving member of her immediate family. She was preceded in death by her parents Frank & Christine Elifritz; her sister Thea Mae Elifritz who only lived 16 days and her brother James Phillip “Jim” Elifritz….” Eureka Times-Standard, September 28, 2010.

Deep appreciation to Steven Streufert for his information assistance.