You are here: Home / Giant Fossil Stork Found In Association With Hobbits

The fossil of a 6-foot-tall marabou-like stork has been found in Indonesia where an earlier discovery of a “hobbit” human species was made, researchers told UPI and other news media. Cryptozoological thought is that this bird may have been represented in ancient human art and folklore as a “crane” with “Pygmies.”

Fossils of the big bird were discovered on the island of Flores, a place previously famed for the discovery of Homo floresiensis, a small hominin species closely related to modern humans, the BBC is reporting.

The new species of stork, named Leptoptilos robustus, reached 6 feet in height and weighed an estimated 36 pounds, researchers say, making it much heavier and taller than living stork species such as the related Marabou stork, which can reach 20 pounds and stand 5 feet tall.

Leptoptilos is a genus of very large tropical storks. Two species are resident breeders in southern Asia, and the Marabou Stork is found in sub-Saharan Africa.

As such it would have towered over the “hobbit” hominins occupying the same island. The stork may have been capable of hunting and eating juvenile members of the smaller hominin species, say researchers who made the discovery, though there is no direct evidence the birds did so. (Cryptozoologically speaking, however, there may be indications that it was the hominins who were attacking the birds. See below.)

Palaeontologist Hanneke Meijer of the Smithsonian National Museum of Natural History in Washington made the discovery with colleague Rokus Due of the National Center for Archaeology in Jakarta, Indonesia. They found fossilised fragments of four leg bones in the Liang Bua caves on the island of Flores, the sites associated with the Homo floresiensis finds. The avian fossil bones are between 20,000 to 50,000 years old, they say.

Around 15,000 years ago, the climate of Flores went from dry to being wet, which may have been enough to drive many of the island’s species to extinction, the researchers say.

Hobbit forum host Dan Gannon points out that “cranes” have been part of the tales associated with the ancient Pygmies (Greek: πυγμαιος), who were a tribe of diminutive humans in Greek mythology. Their name in Greek was Pygmaioi, from pygmê, the length of the forearm. According to the Iliad, they were involved in a constant war with the “cranes,” which migrated in winter to their homeland on the southern shores of the Earth-encircling river Oceanus.

Perhaps the “cranes” were ancient giant storks? There is an ample fossil record of one example of this genus, Leptoptilos titan (Notopuro Middle/Late Pleistocene of Watualang, Java) being hunted by prehistoric humans, and being truly gigantic.

The Pygmy bush tribes of central Africa were so named after the Greek “legendary creatures” by European explorers in the 19th century. These original ancient “Pygmies,” clearly, appear to be what Ivan T. Sanderson, Patrick Huyghe, I, and others would classify as “Proto-Pygmies” in the unknown hominoid and hominology literature. 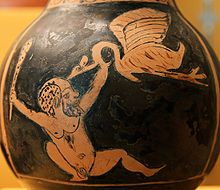 A Pygmy fighting his nemeses the cranes. From the Nuremberg Chronicle (1493).