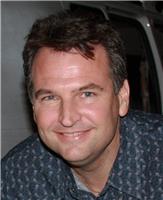 Johnny Hayes, 47, of Wellborn, passed away April 13, 2013. A lifetime resident of Bryan/College Station, Johnny leaves behind many friends, family and loved ones.

Johnny, son of Charles and Mary Hayes, was born in Bryan on November 26, 1965. He will be remembered as a hardworking, devoted and generous man to all his family and friends. Johnny enjoyed spending time with his family, listening to music, composing song lyrics, going to rock concerts, and traveling.

He is survived by his loving wife of 18 years, Brenda Hayes; son, James Hayes; parents, Charles and Mary Hayes of Wellborn; brother, Dale Hayes and his wife, Phyllis of Bryan; niece and nephew, Amanda and Taylor Hayes; and numerous aunts, uncles and cousins.

Johnny was preceded in death by his grandparents, Eddie and Mildred Downs of Navasota; and Clinton and Ruby Hayes of Bryan; and his uncle, Eddie Downs, Jr. Source.

Craig Woolheater writes: “John Hayes attended the Texas Bigfoot Conference going back to at least 2007 in Jefferson. He and his son James attended Cryptopalooza in Jefferson last fall, spoke with you, and they both also attended the most recent Texas Bigfoot Conference in Fort Worth last month. John was a very nice and friendly man who I enjoyed talking Bigfoot with over the years at the conferences. I will surely miss him at the next one. Godspeed Johnny!”

by Loren Coleman on April 14, 2013 in CryptoZoo News, Obituaries, Uncategorized | Tagged Johnny Hayes, Obituary, Texas
Previous Entry: An Image From Our Near Future? First Captive Bigfoot Birth
Next Entry: Caucasus In The News: Almas vs Almasty