Cobra sculpture at the Miami Serpentarium entrance. Shown here in 1954, the Serpentarium operated beginning in 1947. 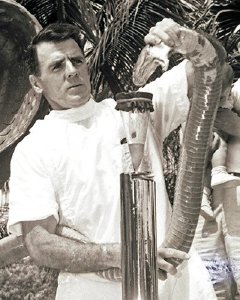 Haast remained director of Miami Serpentarium Laboratories near Punta Gorda until his death. The original Miami Serpentarium, located south of Miami, was in operation from 1947 to 1984. The attraction had a gift shop, 400-pound turtles, a 20-foot-long python. It also had a pit with a 12-foot-long crocodile called “Cookie” that weighed, literally, a ton. Tragically, a 6-year-old boy fell in and died in 1977. Haast went to the pit with a pistol the very next day and shot the croc.

Guests would pay admission to watch Haast extract venom from snakes. Haast, a pioneer in extracting large quantities of venom for research, began the practice when he was a boy.

Haast moved to Utah in 1984 but returned to Florida six years later. That’s when he opened the new Punta Gorda facility, which continues to produce snake venom for medical and research use.

Soon after opening the Serpentarium, Haast began injecting himself with different types of cobra venom in order to develop immunity. It was 2006 and he was still extolling the virtues of venom, saying he injected himself weekly with a cocktail from five snakes – cobras, cottonmouths, kraits, mambas and rattlers – homeopathy the Food and Drug Administration would never endorse.