You are here: Home / Glory Days Of The Globsters Are Gone

Glory Days Of The Globsters Are Gone 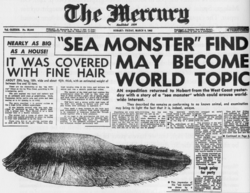 Globsters formerly were a staple of cryptozoological wonders. Large masses of unknown origin would be found beached in exotic locations around the world. Local wags would scratch their heads and big city experts would state their confusion to the media.

Articles written and book comments would repeat the stories over and over again that Globsters were perhaps Sea Serpents or other unknown marine monsters. If only we could get a sample of such and such a Globster, we were told, perhaps a final determination could be made.

The term “Globster” was coined in 1962 by zoologist Ivan T. Sanderson to describe the 1960 carcass (shown above in the news clipping), which today is known as the “Tasmanian Globster.” It was a large unidentified carcass that washed ashore in western Tasmania, in August 1960. It measured 20 by 18 feet (6 m by 5.5 m) and was estimated to weigh between 5 and 10 tons. The mass lacked eyes and in place of a mouth, had “soft, tusk-like protuberances,” with a spine and six soft, fleshy “arms.” The remarkable stiff, white bristles covering its body were always mentioned as adding to the mystery of what this could be.

Another such beaching (directly above) was called the “Four Mile Globster,” and described as an unidentified mass washed ashore on Four Mile Beach, Tasmania, in 1997.

One recent find, which looks similar to all the old Globsters was not even mentioned as mysterious. See two angles of it below:

In an article of during mid-September 2007, entitled “Decomposed Whale Beaches on Oregon Coast…,” no doubt was expressed about the origins of this mass. It was stated to be a whale by the staff of the Seaside Aquarium at Seaside, Oregon. As the article observed, it was…

…one very nasty decomposed whale that washed up Tuesday on Del Rey Beach – just north of Gearhart. It was so badly decomposed that staff from the Seaside Aquarium had few clues from which to identify it. Manager Keith Chandler guessed it might be a gray whale, although Deb Duffield from the Marine Mammal Stranding Network headquarters at Portland State University said she thought it might be a humpback whale. She received the photos via email from Tiffany Boothe at the Seaside Aquarium.

It was about ten feet long and thoroughly unrecognizable, Chandler said.

He said it could be the dead whale that was seen last week floating about two miles offshore from Depoe Bay.

The whale was extremely bad smelling, said Chandler. “It’s just a hunk of rotting flesh,” he said. “It’s just a blob. The skin is so bad and slimy it looks like fur.”

They could not get near it on Tuesday because of high tide. “The last thing you want is that decomposed thing to roll over on you or just touch you, when it’s being knocked around by the tide,” said Boothe.

Boothe and Chandler will attempt to collect flesh and blubber samples from the creature at low tide on Wednesday morning. There is a possibility representatives from the Marine Mammal Stranding Network will come out to investigate as well.

There is no word how it may be disposed of.

The glory days of Globsters appear to be gone. The mystery and glamour of the Globster is a thing of history.

Or so it seems.

The mystery of the St. Augustine, Florida, stranding of 1896, could indeed be a “Giant Octopus,” according to Roy P. Mackal’s analysis of the material on file in the Smithsonian archives. But more recent findings, especially as noted by French cryptozoologist Michel Raynal, indeed, nicely compares the blob found in Chile, which was definitely found to be part of the carcass of a sperm whale to that of the St. Augustine beaching of 1896.