You are here: Home / Flying Monsters in NYC 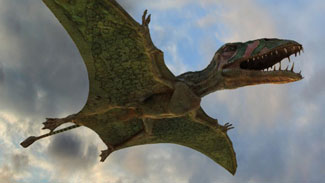 Flying Monsters, on the IMAX.
Follow Sir David Attenborough as he sets out to uncover the truth about the enigmatic pterosaurs—a group of reptiles that ruled the skies about 220 million years ago and, after insects, were the first animals to fly. Attenborough works with scientists and engineers to try and understand how and why pterosaurs flew, traveling to Big Bend National Park in Texas, Lyme Regis in the United Kingdom, and China’s remote Liaoning Province to get answers. The audience will be immersed in the awe-inspiring world of the pterosaur and experience the enormous challenges these creatures faced to survive, let alone flourish, in prehistoric skies.