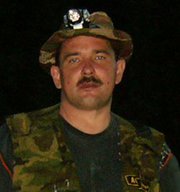 In response to Top Ten Cryptozoology Deaths of 2011, Chad Arment has informed me that Russian hominologist Alexandr Fedenyow passed away only a few days ago. Fedenyow apparently died suddenly. He was 46.

These further insights also are just in:

Tommy Shirley shares these two images created by Alexandr Fedenyow, who was also a graphic artist, of the Russian Almasty variety called Leshiy:

I’m sorry to inform you that on December 15, 2011, at the age of 46 died suddenly Alexandr (Sasha) Fedenyov – a ‘troublemaker’ on the Cryptozoology (Russian) site… Ural’s tracker… Memory Eternal to him! Went to his mother, returned to his home, after a few hours they discovered him breathless. The autopsy showed swelling of the lungs (suffered from asthma). Died December 15, buried on the 17th. Not long ago he very much wanted to go to the Ural’s tayga where he many times met with a hominoid, but had no opportunity… And I am very sorry that I could not help him in this. ~ Igor Bourtsev

As more details are gathered, they will be added here.