You are here: Home / El Reno, Scene of Tornado Tragedy, Well-Known To Cryptozoologists

Tornadoes can be dangerous. Oklahoma was impacted by violent storms right before the weekend, and special tragedy befell El Reno again.

Three storm chasers are among 11 people killed during a tornado outbreak in central Oklahoma Friday evening. According to the Canadian County (in red) Sheriff’s Office, Tim Samaras, 55, his son Paul Samaras, 24, and Carl Young, 45, died while chasing a tornado in El Reno. The area along the state’s I-40 corridor, packed with motorists when the storm occurred Friday, was particularly hard-hit. The nine deaths included seven adults and two children. A mother and a child were killed when their car rolled over.

On May 24, 2011, a violent long-track tornado passed through the El Reno area, causing extensive damage and killing 9 people. The tornado was given an EF5 rating.

El Reno is historically significant in cryptozoology, for it is a town that has a place in the “southern ape” (or Napes) archives. It was there an amazing find was made that was forever made silly by the mere use of a media-inflicted name. Can a silly name for a cryptid incident make us ignore it? What has been the impact on a significant find due to how it was initially labeled? Probably because of its name, you have never seriously considered what was found there. Let us revisit that piece of the evidence, the matter of the El Reno Ape Prints. 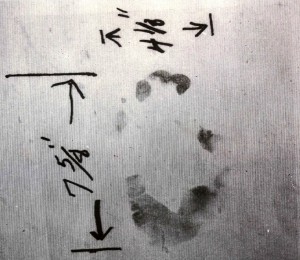 Dr. Grover Krantz first brought to the attention of hominology the possible importance of dermal ridges found in Pacific Northwest unknown hominoid footprint casts in 1982.  But years earlier, in the South, “fingerprints” were quite visible in this find from El Reno. I wrote in two of my books (in 1978 and 1983), about the discovery and photographic record of dermals possibly from an unknown anthropoid found a dozen years before 1982.

“Handprints” or “footprints” resembling those made by a chimpanzee- or gorilla-like anthropoid are part of the question of unknown primate cryptids in the southern United States.

Near El Reno, Oklahoma, in December 1970, something which moved on all fours raided a chicken coop, leaving a handprint on the door. Local media called the anthropoid visitor the “El Reno Chicken Man.”

The door and the 7″ x 5″ handprint were taken to Lawrence Curtis, Director of the Oklahoma City Zoo, for an opinion. I exchanged letters on the matter with the zoo director. Curtis told me he was frankly baffled. He found the thumb of the print quite unusual – it was crooked as if deformed or injured. Curtis thought it was from a primate but was uncertain of what kind. I traveled to Gloucester, Massachusetts to interview the famed anthropologist Carleton Coon. During my session with the gentleman, I asked about the print, as well, as a wide ranging array of topics on past expeditions and Tom Slick. Coon felt the track was definitely made by a higher primate.

In my files, I had collected reports from over a three-year period in the same general area – a mere 16 miles away, from 1967-70, of a Howard Dreeson of Calumet, Oklahoma, who left out bananas and oranges for an animal he described as a “chimpanzee.” He had hoped to capture it. He never did.

An examination of the photograph of the El Reno “handprint” left on the chicken coop door shows not so much a deformed hand as a typical anthropoid footprint. In this fair quality reprint of the photograph, dermal ridges are slightly visible. 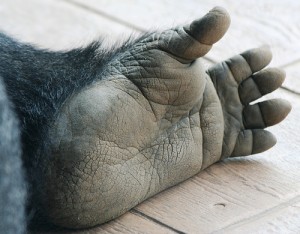 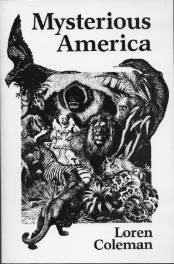 Previous Entry: Rewriting The History Of The Pangboche Yeti Hand
Next Entry: Cryptozoology, Cryptid and Hominology