You are here: Home / Will Cryptids Save The Media?

Will Cryptids Save The Media?

Technology and Internet columnist Brian Caulfield (below) of Forbes recently asked the question, “Can Animals Save Mainstream Media?”

He noted that the media might want to “Forget crime and celebrities. These websites know what really sells: critters.”

But, indeed, looking a bit deeper, Caulfield revealed it might be the cryptids and odd creatures that do the saving. He wrote:

“The media may be new, but sharing information about animals is an old instinct. Mythologist Joseph Campbell explored the hold animals have on the human spirit in The Way of the Animal Powers, the first book in his planned four-volume work on world mythology.

“Campbell says the human impulse to understand the world began in the Paleolithic era with observations and dreams about animals. Sharing tales of animals is an age-old way to connect.

“And to this day, animals remain a source of mystery and wonder. Those looking for hardcore science on the reproductive habits of egrets can peruse dense, scholarly articles in Nature. The rest of us suck down content from television’s Animal Planet and National Geographic‘s online animal news feed.

“The more adventurous can read tales of animals that seem tantalizingly out of reach on cryptozoologist Loren Coleman’s Cryptomundo, a website specializing in tales of lake monsters, wild men living in the forest and other creatures whose existence remains unverified.

“It’s hard to scoff, considering zoologists are still discovering new species of primates, such as the Callicebus caquetensis titi monkey found earlier this year in Colombia.

“Wilder fare still lurks on Fortean Times, with its tales of mysterious civilizations, weird creatures and aliens. What are aliens, however, if not just the most exotic possible form of animal?”

Of course, the trend of increasing interests in cryptids and cryptozoological topics has been played out in mass media, in the last decade. This has occurred whether it is the electronic version via mainstream television and cable, in reality programming and in journalistic pieces, in the print media, via magazines, newspapers, and books, or on the Internet. The explosion of attention to cryptozoology is way beyond what any of us could have expected in the early days of media awareness to the unknown, hidden animals.

I recall exchanging correspondence with Ivan T. Sanderson in 1965, in which we speculated there were only a handful of people in all of America gathering stories of the “little red men” in the southern swamps, as we two were. To comprehend the thousands of people who daily read about and share information on any one topic in cryptozoology is sometimes mind-boggling.

Yes, news of crimes and celebs does have a certain following, but the role of cryptids, creatures, and cryptozoology on the Internet, and in the media in general, must be acknowledged as a major force in driving passions today.

Any casual media observer surely has realized that during the spring of 2010, as highlighted by mainstream media treatments by Stephen Kurczy of the Christian Science Monitor and Lee Speigel of AOL News, there has been an explosion of cryptozoology-related pieces. For example, the articles have been about an “Oriental Yeti” (a civet), a bald Ontario “monster” (a mink), a Texas “Chupacabra” (a coydog), a couple Loch Ness Monster incidents from the 1930s, and the new discovery of the red panda in Tennessee, thus all centering on cryptic species events.

When even a hoax like the Georgia Bigfoot stupidity of 2008 can move 1.9 million people to click on Cryptomundo to read of the discovered solution of the fakery does, indeed, say something about the times in which we live. 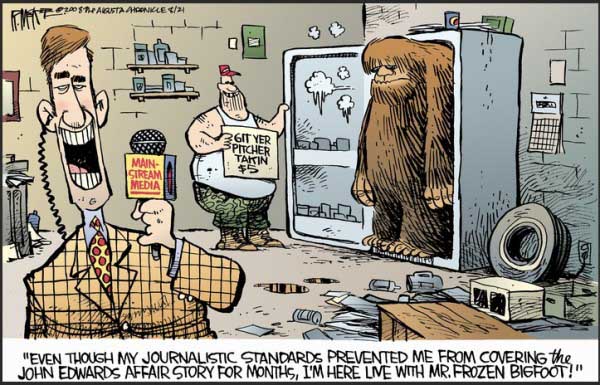 This feature and mention by Forbes was most appreciated. Forbes Traveler, it will be recalled in 2009, recognized the International Cryptozoology Museum. It is wonderful to see the Forbes writers, in general, are aware of cryptozoology.