You are here: Home / Creature From The Black Lagoon: Inspired by the Coelacanth

Creature From The Black Lagoon: Inspired by the Coelacanth 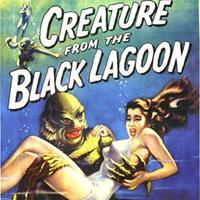 The underlying plot of the original Creature From The Black Lagoon is of a geology expedition uncovering on a Amazonian riverbank a fossil of a reptilian skeletal hand with webbing between the fingers. The scientists feel this demonstrates a link between land and aquatic animals.

Arthur Ross was the screenwriter of the 1954 film. He passed away on November 11, 2008.  His son, Gary Ross, is the writer and producer of an alleged new production of Creature From The Black Lagoon, which appears to be in development limbo. Gary Ross is best known for directing the films Pleasantville and Seabiscuit. 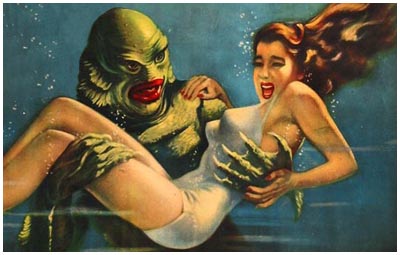 Gary Ross said about the new version: “It’s not like the original, it’s not, my Dad wrote the original, so it’s not a reference to what the original is. We take it sort of seriously. We found some scientific under pinnings for it, which my Dad actually felt in the original. In fact, he based it on a lung fish that was found around that time. So a lot of that was his.”

What the younger Ross is referring to, of course, is not a “lungfish,” per se, but the media frenzy in December 1952 and 1953, caused by the search for and discovery of the “second” coelacanth. The coelacanth is the inspiration for Creature from the Black Lagoon, which was released only a few months after the second coelacanth was found. 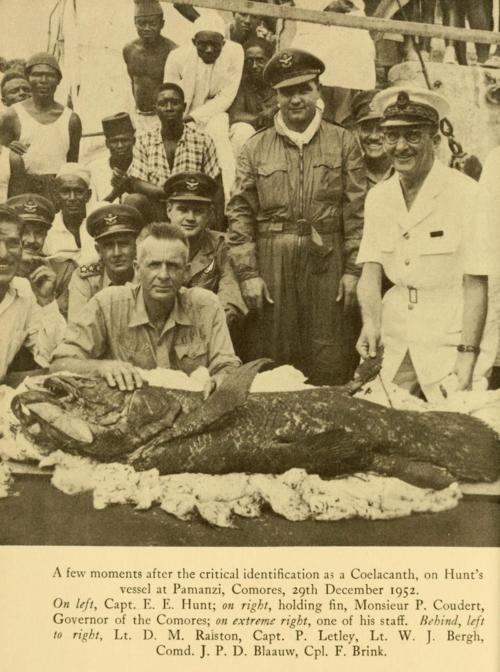 Unidentified in the photograph above is the man responsible for the massive search for this specimen, the man with his hand on the fish: J.L.B. Smith (October 26, 1897 – January 7, 1968), a South African ichthyologist, organic chemist and university professor. He was the author of the famed book, Old Fourlegs – The Story of the Coelacanth (Longmans & Green, 1956).

Most people are not aware that the late 1952 coelacanth discovery inspired the 1954 film.

Creature From The Black Lagoon is definitely cryptozoocinema royalty.