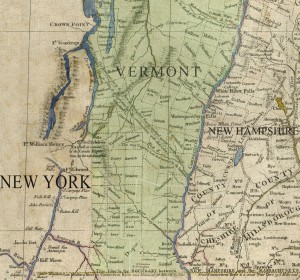 I’ve been alerted to another YouTube video of an allegedly unidentified lake cryptid seen in Lake Champlain.

It reportedly was shot by a teenaged individual at Button Bay in Lake Champlain, near Vergennes, Vermont, on July 30, 2011 (although it was only recently uploaded in November).

While the southwestern Floridan who saw this online and passed it on to me states that I can view “2 Elasmosaurus(?) swimming” and observe ”their extremely long necks and humps, and at 0:22 seconds what looks like a paddle stroking and splashing,” I’ll reserve if that’s what I’m seeing.

Since this footage was freely posted on YouTube by this alleged “amature (sic) videophotographer (sic),” who says he’s ”16 year old (sic),” I share it with you for your insights, during this holiday weekend.

As noted in comments below by wuffing: “On YouTube it is attributed to a young lady who is clearly the daughter of Ruby Anderson, leader of several Champ searches over recent years. It is unfortunate that a tripod was not used, and that the video hasn’t been published as a team achievement.”

Button Bay State Park is a 253-acre park, on the Vermont side, located on a bluff in Ferrisburgh along the 130-mile long Lake Champlain. Historically, the area has been visited by such notables as Samuel De Champlain (1609), Ethan Allen (1776), Ben Franklin (1776), and Benedict Arnold (1777). What once operated as a farm, opened as a state park in 1964. The park is so named for the button-like concretions formed by clay deposits found along the shoreline. It is seven miles from Vergennes, not far from Crown Point, as well.