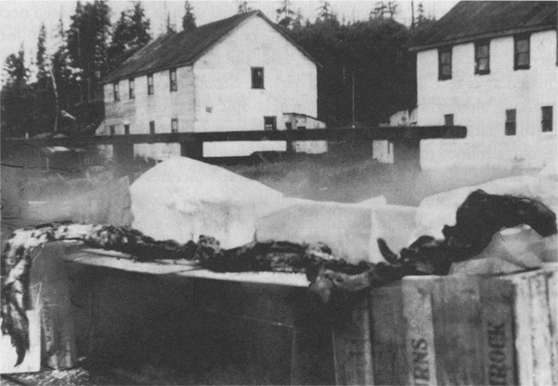 One of the archival photos of the October 1937 Cadborosaurus carcass.

Today the big move of the 8 ft tall Bigfoot and other large items into the downtown Portland space on Congress Street occurs. News media will be there and I’m busy with lots of the arrangements. Therefore, here is a story about the near future, next attraction of the museum. Hopefully, we’ll have photos by the end of today of the move.

Coming soon to the International Cryptozoology Museum will be Lee Murphy’s full-scale model of an example of a living juvenile Cadborosaurus based on the 1937 carcass found in the stomach of a deceased whale.

The original was discovered at the Naden Harbor whaling station in the Queen Charlotte Islands, British Columbia, Canada, and described as about ten feet long. The cryptid body had odd characteristics such as a camel-like head, a long elongated body of serpentine proportions and curiously shaped fins and tail.

Lee Murphy is a former Hollywood model maker and the author of Naitaka, Heretofore Unknown, and Where the Legends Roam.

The model’s tail as it would have appeared in life (above) is compared with depictions of the creature’s partial decomposed tail (below) found in the whale’s stomach.

Join the BCSCC and artists like Lee Murphy in supporting the International Cryptozoology Museum, as it opens publicly in downtown Portland, Maine. Have your name added to the plaque on the wall of the museum honoring everyone who gives, all of whom are “Museum Heroes,” no matter what amount donated.

Thank you, and come visit the museum at 661 Congress Street, Portland, Maine 04101, beginning November 1, 2009!! This educational/scientific/natural history museum is not a 501(c)3, meaning your funds are all that more important as we do not receive government grants.