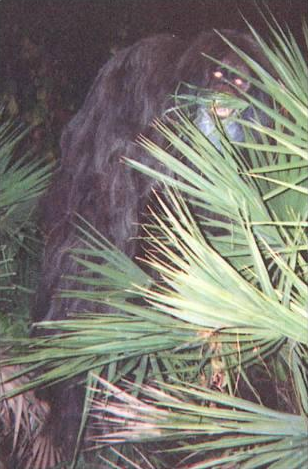 Does the Mission Monster look like the Myakka Skunk Ape, shown above? (The creature was renamed after its exact location was re-established.)

There is breaking news out of Texas:

Creature sightings reported in Mission for weeks
May 02, 2012

By NAXIELY LOPEZ/The Monitor
NEAR MISSION — An orangutan-like primate reportedly roams the streets here, but no one has been able to capture an image of it — much less the animal itself.

Several law enforcement agencies have heard reports — often rumors — of a large orange- and red-furred animal that wears a white beard, but only one has a documented case.

On April 15, the Hidalgo County Sheriff’s Office received a call concerning the creature from a homeowner in the 6200 block of Western Road, according to information from Sheriff Lupe Treviño. Jose Garcia spotted the animal running into an orchard in the southwestern corner of Mile 5 and Western Road shortly after 10:15 p.m., according to the report. And Garcia told authorities a family member also saw it, several days earlier near Mile 3 and Western Road, west of Mission.

Investigators who went to the scene solicited the help of John Franz, a Brooks County cowboy, to help apprehend the animal. Dispatchers clocked in Franz’s arrival several hours later at 3:29 a.m. April 16. It’s unclear from the report if anyone else spotted the creature or if it was caught.

Tuesday morning, Mission police became the latest to catch wind of the animal when they received a report from a student aboard a school bus. The sighting of a large primate — later described as the size of a 13-year-old boy — was reported near Stewart Road and Mile 2, said Cpl. Manuel Casas, Mission police spokesman. An officer searched the area, but did not find anything, he said.

Lupe Tijerina, who owns a home just north of the intersection in Mission, was cutting the grass outside his home Tuesday afternoon. The 77-year-old said he hadn’t seen or even heard of the alleged primate roaming his part of town.

“Ah, Chihuahua. Oh my golly,” Tijerina said after hearing the animal was reportedly the size of a teenage boy. “That’s scary. We have a lot of grandchildren and great-grandchildren over here.”

Mission police later corrected the initial information released and said the sighting had occurred near Mile 2 and La Homa Road, which placed the new sighting in Palmview’s jurisdiction.

Palmview police Chief Chris Barrera said he heard of reports in Mission, but his office had not received any calls.

Norma Vargas, 42, works at the H&H Meat Market at the Palmview intersection where the alleged orangutan was spotted Tuesday morning. Though she hadn’t seen the animal, she said, her 10-year-old son Alberto had mentioned a sighting about two weeks ago as they drove through a neighborhood near Mile 6 and La Homa Road and came across a group of sheriff’s deputies standing outside a home. Her son asked if she knew why the officers were looking up at the trees. She said no.

“They’re looking for a monkey who bit his owner,” she recalled Alberto telling her, and one of his friends who lives in the neighborhood had spotted it.The Brownsville Herald

The rest of the article can be read here. It is a dismissal ending about spider monkey sightings and drug dealers’ released pets. It really has nothing to do with the above, but it is what the media does with such accounts, sometimes.