What does the new Knobby look like? Some of the world’s most famous cartoonists have responded to the challenge. See the results! 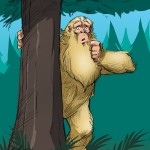 Knobby is back or, at least, a new hairy hominoid is being reported in the same area of North Carolina where the old Knobby reports occurred.

The descriptions are specific. Below, I shall be sharing with you the illustrations from some of the world’s best artists/cartoonists who have depicted this creature for me.

First, here is a quick review.

Timothy Peeler called 911 on June 5, 2010, saying a man-like beast was loose on his property. He said the creature was “upwards of 10 feet tall” and screeched and grunted his way along.

Peeler saw enough to say the Bigfoot-like individual had dark hair and a gray beard that extended all the way down his belly. He says he “rough talked” the creature with “beautiful hair” and ran him off.

Lee Speigel’s AOL News story added the final detail, which has pushed this sighting over the edge into monster media mania for the summer.

From Peeler’s mountain home in North Carolina, it was noted “the thing was 10 feet tall with beautiful hair, yellowish hair, and a yellow beard,” the mountain man recalled. Peeler also said the beast had six fingers.

Okay, first of all, let’s deal with “blond” vs “blonde.” Should this have been described as a “blonde” creature, instead? The terms “blond” and “blonde” come from the French and thus follow somewhat the French pattern of usage. “Blond” (without the e) is used to describe males, mixed gender, or uncertain gender. “Blonde” refers to women or female gender. In modern use, “blond” is sometimes used for female as well as male, but “blonde” is preferred for female.

Since this recycled Knobby or this new North Carolina Bigfoot appears to be male, as best we can tell from the beard, the most accurate employment would for it to be called “blond.”

While we are going to go with the blond description for the day, I must proclaim one of the artists consulted receives the “Yellow Light Bright Idea Award,” for incredibly good detective work in thinking through this reported description.

Charles Berlin, the cartoonist behind Professor Wexler, when doing this exercise for me, wrote: “I’m sure you observed this in the video: there is an outdoor light mounted on the witness’s shed, which gives off a yellow light—hence a greying Knobby turns ‘blond.’”

The mystery may have been solved as to why this Bigfoot “appears” to be blond.

So, without any further waiting, here are what the artists have submitted for what the blond Bigfoot, Knobby revisited, might have looked like.

First, from the Secret Saturday and Scooby-Doo writer John Rozum, the following image has been sent along, tongue-firmly-in-cheek:

Rozum’s son, Dash, however, has sent to me a more realistic Bigfoot drawing aligned to what was seen:

Ted Bastien of Bugsport sends along this blond Knobby:

Dave Lowe of Paraabnormal The Comic sends in this novel approach:

All are excellent representations of what they view as the Knobby Blond Bigfoot.

Every image above is copyrighted in the name of the artist, “Courtesy International Cryptozoology Museum, Copyright 2010,” and may not be used without the expressed permission of the artist and Loren Coleman, the ICM director. Thank you.

Obviously, links to this blog posting are encouraged, and those may be made with the use of a thumbnail image from above.