A breaking news item out of Wisconsin says a Bigfoot was seen grabbing a road-kill deer and hightailing into the woods with it. Details on that in a minute. 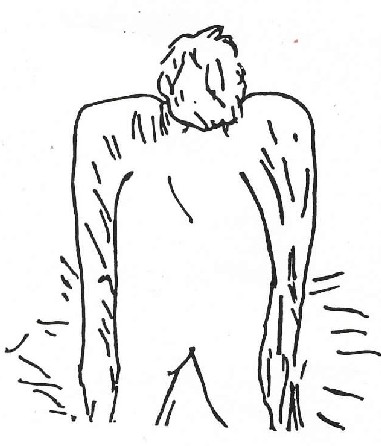 One of the first eyewitness drawings of Momo.

Wisconsin seems to have had some interesting Bigfoot reports in recent years. The one that happened yesterday, November 9th, 2006, may be extremely unique, but then the state has given us some of the most interesting eastern cases of the 21st century. Take, for instance, there’s the case of Mr. Hughes.

Around 5:15 a.m on March 28, 2000, James Hughes was delivering the little local newspaper, Black River Shopper, along County Highway H, near Granton, Wisconsin, when he noticed a figure standing in the ditch – carrying a goat. (This has always reminded me of the first sighting of Momo in 1972, where it was seen carrying a blood-dripping dead dog.) At first Hughes took it to be a large man, but then he saw it was about eight feet tall and had an ape-like face.

“He was all covered with hair, a real dark gray color, with some spots that looked a honey color. It was walking on two legs, and it was mighty, mighty, big,” Hughes said. In its left hand it held what he at first took to be a goat, but later he wasn’t sure, it might have been a little sheep. When the beast turned to look at him, Hughes said he floored the gas pedal and sped away, very scared.

“I didn’t call it in (to the Sheriff’s Department) until the next day, because people would think I’m crazy. And I don’t drink, I don’t use dope, and I was wide awake,” Hughes said.

Hughes finally did file a report with the Clark County Sheriff’s Department, and a deputy was dispatched to the scene but could not find any large footprints or other evidence.

Hughes’ description very closely matched what has become a familiar Midwestern Bigfoot appearance – overall hair-covered body, with hair six to eight inches long, and the lack of distinguishing facial features. Whether from Missouri, Illinois, Wisconsin, or Michigan, this “look” has become well-known to cryptozoologists, although most Midwesterns still “think” about Bigfoot, visually, like the PNW Sasquatch, until they see it!

The Sheriff’s Department said Hughes gave a very detailed description, but without tracks or other evidence suggesting a creature was in the area, the hunt ceased. Nevertheless, the report circled the globe, and became one of the top Bigfoot sightings of 2000.

Now comes the report from Steven Krueger of Washington County, Wisconsin. As part of his employment, Krueger goes around the area and picks up road-killed deer carcasses from the roadways. At 1:00 A.M on Thursday, November 9, 2006, Krueger had just loaded a deer into his truck, when he saw what he said looked like a “large black animal, at least 7 feet tall and larger than a bear.”

What happened next was totally unexpected. The thing that seemed to be a Bigfoot jumped into the back of his truck and took the road-killed dead deer.