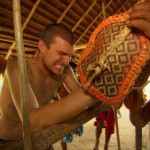 On Sunday, May 15, 2011, the International Cryptozoology Museum hosted visits from two well-known guests. Old friends from Troy, New York, both were in Maine and met at the ICM. Here are some snapshots:

Loren Coleman, cryptozoologist, Pat Spain, host of “The Beast Hunter,” and Jeff Meuse, Coordinator of Docents at the ICM.

Loren Coleman and Pat Spain clown around, while striking poses they often have to take when engaged in television reality show program interviews!

Andy Finkle (presently of South Carolina, perhaps moving to Maine with his wife) stands in front of the wall of Bigfoot art at the ICM. Finkle’s red Bigfoot is a featured display at the top of the painting exhibits.