You are here: Home / Breaking News: “Gorilla” Seen In Alabama

North American Apes (Napes), Swamp Apes, Boogers, or Gorillas in Alabama, whatever you want to call them, are soon to be in the news again. A reporter I know in the state has informed me that a major investigation is occurring this week of new accounts coming out of Perry and Hale counties, Alabama, of encounters with “gorillas.”

Hale County, AL -
The Hale County Sheriff’s Office says they are searching for at least one gorilla. A gorilla was last spotted near a store on County Road 61 in Newbern.

A dispatcher with the Sheriff’s Office said a crew consisting of the Newbern Volunteer Fire Department, police department, as well as Sheriff’s deputies were searching for the animal.

Currently, it is unknown how many are loose or in what direction they are headed.

ABC 33/40 has a crew in Newbern and will provide more information as it becomes available.

BTW, “gorilla” is a word used to describe what people are seeing. Think outside the box.
+++++

As examples of past “gorilla” sightings from Alabama, let me share two historical review articles:

Gorilla Family Hunt Is In Vain

Anniston, Alabama, April 15 (UP) ~ Sheriff W. P. Cotton dismissed a posse of “wild man” hunters today and reported that an all day search for a strange gorilla like family in a Choccolocca Valley swamp was in vain.

Cotton led a group of farmers and citizens into the swamp after rural residents reported seeing a man, woman and child whose bodies were covered with hair and at times walked on all fours.

By Jason Cannon
The Clanton Advertiser

It’s been almost 25-years since the original report was filed in the fall of 1960 but that hasn’t stopped Bigfoot spotters and researchers from around the country as citing the events around Walnut Creek as a legitimate and marvelous occurrence.

“There’s a Southern version of Bigfoot that is much like a chimpanzee,” said Bigfoot researcher and [fulltime researcher and adjunct] professor at the University of Southern Maine, Loren Coleman. “It runs around in the bottom lands and is much more connected to the creeks and swampy areas.”

Two years ago, Coleman penned a book about Bigfoot and has devoted a portion of it to the uniqueness of the Clanton sighting.

“At a time where people in the 50s and 60s were talking about Bigfoot being just a giant that looked like a human, this was extremely important because it shows they were more ape like creatures in the south.”

Coleman said the prints left behind at the Clanton scene proved the creature was more ape than man.

“It’s a very general kind of creature that’s much different than the Pacific Northwest Bigfoot that’s 8-to 9-feet tall and stands upright.”

Also, the southern version is often referred to as a booger, a swamp ape or a skunk ape and only stands around 4-feet tall.

According to reports, including those of witness Reverend E.C. Hand of the Refuge Baptist Church, the creature was seen along Highway 31 where it crosses Interstate 65 – just south of town. A few more were filed from two-miles west.

The report said, “Large and small tracks were found as if there were at least two individual animals.”

Then Sheriff T.J. Lockhart and Deputy James Earl Johnson investigated the scene and according to the report, described the prints left behind as “the strangest things I’ve ever seen.”

Lockhart and Johnson also took a concrete mold of the prints.

The prints were described as “about the size of a person’s foot but looking more like a hand.”

The cast was on display at the courthouse for many years but in August 2002 the Sheriff’s Department discarded it.

“That’s why the cast was so unique is that is actually proves that the southern ‘Bigfoot’ was much more like a chimpanzee than a human.”

Coleman said one theory is that the chimpanzees were brought over during the African slave trade and allowed to run wild.

He added there have been reports filed about similar creatures for about 250 years across the south.

However, there have been no other documented sightings in Chilton County since 1960. 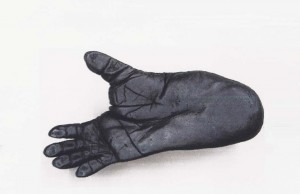 This is the tenth anniversary of the discarding of the valuable evidence that was the alleged footcast of the Clanton “ape.” I searched and searched for the concrete cast for years, and to finally hear that it was sitting at the Sheriff’s Department, then was thrown away, was frustrating and heartbreaking.