You are here: Home / April 28th Is Atlas Obscura Day 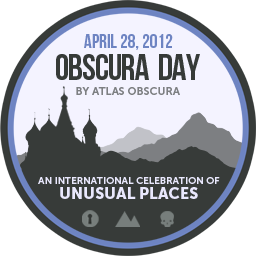 This year’s global celebration of odd places to visit, Atlas Obscura Day, is occurring on Saturday, April 28, 2012.  The International Cryptozoology Museum in Portland, Maine, has been invited to be one of the spots.

The museum will be open for regular hours with regular fees, from 11 am to 4 pm on that day. Then during the early evening, a special event will occur.

A figurine of the Dover Demon (created by Steve Goodwin) is displayed at the International Cryptozoology Museum in Portland.  The strange creature was spotted in Dover, Massachusetts, in 1977 and Loren Coleman coined the name after investigating the sightings. Photo Credit: Amber Waterman/Sun Journal.

Here is the AO’s site description:

Come to the International Cryptozoology Museum for a special expanded Obscura Day orientation with extra docents on duty to help with tours and questions. Loren Coleman, Cryptozoologist and founder of the Museum, will be there too, so all Obscura Day guests can chat with him, ask him questions, and get autographs, if they wish.

Beginning at 4pm: “The Dover Demon: 35 Years Later” – Night at the Museum

April 28th marks the 35th anniversary of Loren Coleman’s investigation and naming of the “Dover Demon”, a mysterious creature first sighted around Dover, Massachusetts in 1977. Everyone will get to tour the museum and the new special Dover Demon exhibition, and then at 5:30pm, Coleman will give a special presentation the “Dover Demon: 35 Years Later” full of unique slides and diagrams about the 1977 Massachusetts events.

For more information on tickets to the lecture, see ”The Dover Demon: 35 Years Later.”

The lecture will include rare photographs taken by Walter N. Webb, who at the time was the Charles Hayden Planetarium in Boston’s assistant director and senior lecturer. This group photograph by Walt was taken in front of the main house of the Walker School in Needham, just across the Charles River from Dover, Massachusetts. I was working there and meet the assembled team I invited into the investigation early in May 1977. I’m shown to the left; in the middle is (the late) Ed Fogg; and to the right Joe Nyman. They, along with the photographer Walt Webb, were highly qualified ufological investigators from various national organizations.

Perhaps for this anniversary event we should encourage all museum docents and visitors to wear clothes (head to toe) from the 1970s, like what I have on below?  Of course, I’m not sure where I can find shoes like those!!

If the shirt didn’t get ‘em, the disco era’s shoes were enough to scare away the Dover Demon!