Government archives have been discovered showing that the State Department and others had a keen interest in the Tom Slick-F. Kirk Johnson Snowman Expeditions of 1958-1959. The records of such an active pursuit of information was just revealed this week.

Needless to say, while writing my books on Tom Slick, I found hints of this in the FBI FOI files I was sent. 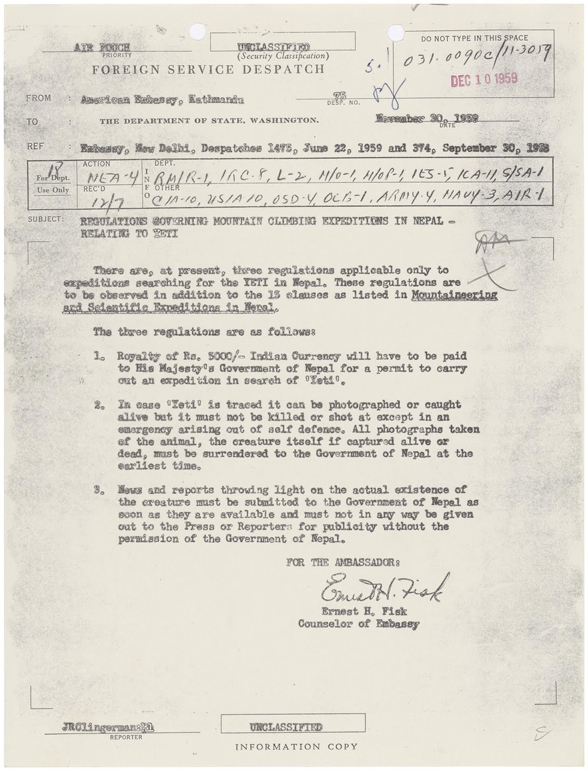 by Paul Bedard and Lauren Fox

Newly unearthed State Department documents confirm for the first time Uncle Sam’s belief that the Abominable Snowman roamed the mountains of Nepal in the 1950s, a finding that has shocked federal officials including the archivist who discovered the papers.

Long written off as a myth, it was never caught or photographed, the documents provided by the National Archives show that officials in the State Department, Foreign Service, and U.S. Embassy in Kathmandu, Nepal, not only believed in “Yeti,” but endorsed rules for American expeditions to follow when hunting the toothy monster down.

“There are, at present, three regulations applicable only to expeditions searching for the Yeti in Nepal. These regulations are to be observed,” said a memo from the embassy written on State Department letterhead.

The first rule required that expeditions buy a permit. The second demanded that the beast be photographed or taken alive. “It must not be killed or shot at
except in an emergency arising out of self defense,” wrote Embassy Counselor Ernest Fisk on November 30, 1959. And third, any news proving the existence of the Abominable Snowman must be cleared through the Nepalese government which probably wanted to take credit for the discovery.

Archivist Mark Murphy said he couldn’t believe his eyes when he discovered the long-ignored papers written at the end of the Eisenhower administration. “I
thought I was seeing things,” he said. “These documents show that finding the Yeti was a big deal in the 1950s. It goes to show the government was taking this seriously.”

One foreign service dispatch from the Embassy of New Delhi dated April 16, 1959 describes the many American expeditions involved in mountaineering and monster hunting in Nepal.

“American resources in the last two years have been concentrated on efforts to capture the abominable snowman,” the record reads.

Tom Slick, a millionaire with a specialized interest in cryptozoology paid for three separate expeditions in Nepal to find the snow beast, immortalized in the 1964 Christmas classic Rudolf the Red-Nosed Reindeer.

Slick never found it and he went onto pursue Bigfoot in the Pacific Northwest.