You are here: Home / Wood Knocking For Bigfoot Dates From At Least 1974

Wood Knocking For Bigfoot Dates From At Least 1974

At the beginning of the preview episode of “Finding Bigfoot,” Matt Moneymaker states that he has been hunting Bigfoot for 25 years. Since this is now 2011, that means that he got into the field some time around 1986. Midway through the episode, after hearing a couple of loud knocks on wood in response to calls, he says: “Just so you know, one of my claims to fame in the Bigfoot world is that I was the one who discovered that Bigfoots do wood knocks, and that figured out that if you make sounds that they’ll respond. No other Bigfoot researcher had ever figured that out or knew that before, because they didn’t really go into the field that often.” 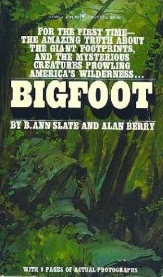 Bigfoot, by B. Ann Slate and Alan Berry, Bantam Books, 1976, describing Berry’s experiences in the Sierras:

“Warren at one point stepped out of the shelter and whistled to them, and was answered in whistles in an exchange that lasted several minutes. My impression, with the vocalizing that accompanied the whistles, it was not mere mimicry but an attempt at communication.” (page 29)

“They were still working uphill from the shelter when one of the creatures announced its arrival, or presence, on the scene. It made itself known with a sharp rap of wood against wood, a double rap echoing from a ridge line above camp. “Guess who,” was Larry’s remark. As they continued their task, sharp, periodic raps continued, sometimes punctuated by a more rapid, insistent-sounding rap-rap-rap.” (page 30)

The use of a double-rap on wood and the use of call and response is described several times in this book, published in 1976 and describing work done in 1972-74. When Alan went on KGO radio in the San Francisco Bay Area in 1976 and played recordings of the sounds he had heard, I called in to say that I’d heard the same sounds at my own field site. This led to many years of working together and many opportunities to use the call and response and use the sound of rapping on wood to call the creatures closer to our campsite. (I have personally used the wood knocks and whistles to coax a Bigfoot close enough to be seen in daylight.)

I spoke with anthropologist Jane Goodall about this double-rap phenomenon in 1977. She confirmed that chimpanzees often do something similar when entering a valley as a way of announcing their presence and listening for a response.

Before Moneymaker says that these statements were only published in one obscure book, I hasten to add that Alan’s recordings were the subject of an academic paper presented at the “Sasquatch and Similar Phenomena” conference held by the University of British Columbia in Vancouver in 1978 — an event which most of the leading Bigfoot researchers attended and the papers of which were collected in the volume Manlike Monsters on Trial (ed. by Marjorie Halpin & Michael M. Ames, University of British Columbia Press, Vancouver, 1980). The recordings have been available to the public – first on LP and then digitally – for almost 35 years. You can hear a sample of them here.

Moneymaker should know this [info] since his own BFRO website links to the recordings here.

I am NOT saying that Alan Berry (or I) was the first to “discover” the wood knocks and/or call and response phenomenon with Bigfoot… there were probably other folks who noticed this before us. I AM saying that there were researchers talking about this in the Bigfoot community a full 10 years before Moneymaker says he first got involved, and that he should know that and not claim otherwise.