You are here: Home / Tornit

Inukshuk is the Inuit word for a structure of stacked rocks in human form. Or were these ancient forms of art trying to show something else? This one is from northern Quebec. 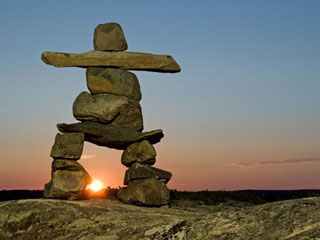 New interesting reports are coming in from the Far North.

Here are some clarifications on the local names that have been associated with the large, hairy, mostly biped creatures seen in the northern parts of North America.

The white man’s names are Sasquatch (invented in 1929 in Canada) and Bigfoot (first used in California in 1958). The name True Giants was coined by Mark A. Hall only a few decades ago.

Most First Nations groups, Canadian Natives, American Natives, Inupiat–Yupik, and Inuits have their own names.

For instance, in California, around the area where the 1958 reports started coming in to the white Americans, the Hoopa called it Oh-Mah.

The names from Alaska and the Yukon range from Bushman to Gilyuk.

It is called a Windigo/Wendigo by the Algonquian tribes in the northern United States and eastern Canada, most notably the Ojibwe and Saulteaux, the Cree, the Naskapi and the Innu people.

This Pitt Lake, British Columbia, giant was seen by two prospectors in June 1965. Credit: Harry Trumbore’s drawing from The Field Guide of Bigfoot and Other Mystery Primates.