You are here: Home / The Diamond Jubilee Year: Top Ten Coelacanth Stories of 2013 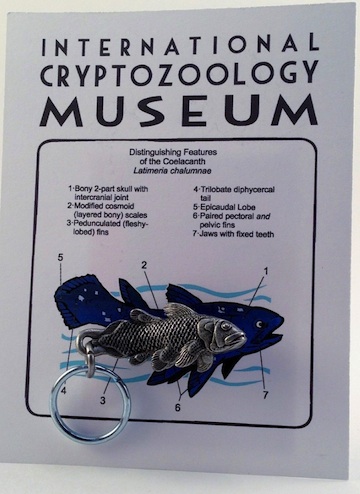 Coelacanth keychains were offered for the first time in 2013, at the ICM. Source.

As I wrote in Cryptozoology A to Z (with Jerome Clark, NY: Simon and Schuster, 1999), “The coelacanth (Latimeria chalumnae) is the darling of cryptozoology, a true living fossil. Its story demonstrates that unknown, undiscovered, or at least long-thought-extinct animals can still be found – especially in the oceans.” (In 2013, the tenet of the “living fossil” stance was severely challenged.)

Until 1938 paleontologists thought that the coelacanth had become extinct about 65 million years ago, when the dinosaurs disappeared. The year of 2013 is the 75th anniversary of the discovery of the modern coelacanth. Let’s review some of the top coelacanth stories of the year.

Belgian coelacanth archivist Rik Nulens noted to global coelacanthists in his annual email that 103 bibliographical additions were added to the update of his 19th edition of his coelacanth bibliography, with 5340 total titles now.

This bibliography update is available on Jerry Hamlin’s Dinofish-website, with the links off the “Biology and Behavior” page.

In April, it was announced that an international team of researchers decoded the genome of the African coelacanth. ”We found that the genes overall are evolving significantly more slowly in the coelacanth than in every other fish and land vertebrate that we looked at,” said Jessica Alföldi, a research scientist at the Broad Institute and co-first author of the paper on the coelacanth genome, which appeared in Nature. Source.

The notion of the coelacanth being a “living fossil,” because they do actually still evolve, thus, took a severe hit. Source. 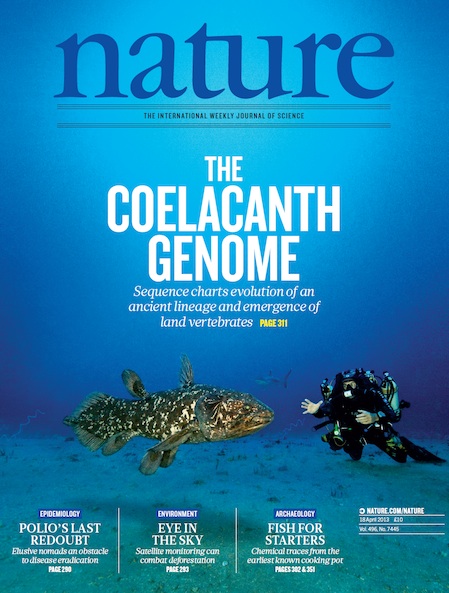 During the Diamond Jubilee of the first coelacanth find in East London (South Africa), SAIAB published a special publication, Building on the South African Coelacanth Legacy, to mark this seminal event, Rik Nulens alerted researchers. The publication is available to all. Download a pdf of this publication here.

The new 2013 Silver Series from the South African Mint featured the Marine Protected Areas of South Africa. The 10c almost pure silver coin depicted, as they note, “the ancient Coelacanth.” There were only 1000 of them produced and they are quite expensive, even for collectors and museums. 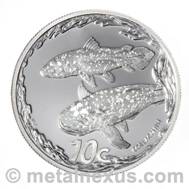 Masa Iwata from the Japanese Aquamarine Fukushima was in Indonesia again and sighted a coelacanth in the Manado region. Source, in Japanese. 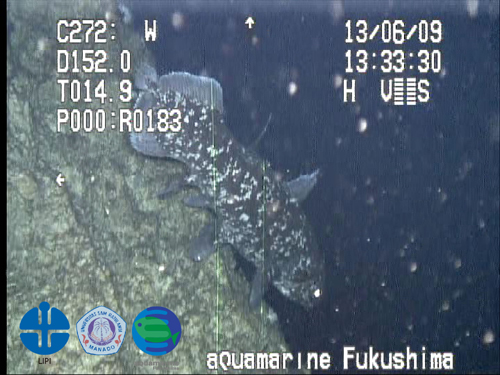 French diver Laurent Ballesta and a team of divers were in South Africa for 40 days, beginning in April 2013. It was a French – South African Expedition with participation of scientists from SAIAB/ACEP, the National Museum of Natural History in Paris and CNRS (France), Peter Timm and his team from TRITON Dive charters & Lodge. They managed to film and photograph coelacanths in their natural habitat with special equipment. Source. 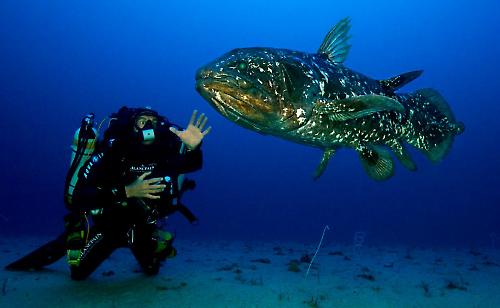 A new 2013 article written by Samantha Weinberg was published in Intelligent Life (November 2013). Find it here.

The Coelacanth 75th Anniversary was officially celebrated on the 22nd and 23rd December 2013, where it all began, at the East London Museum in South Africa. Source. 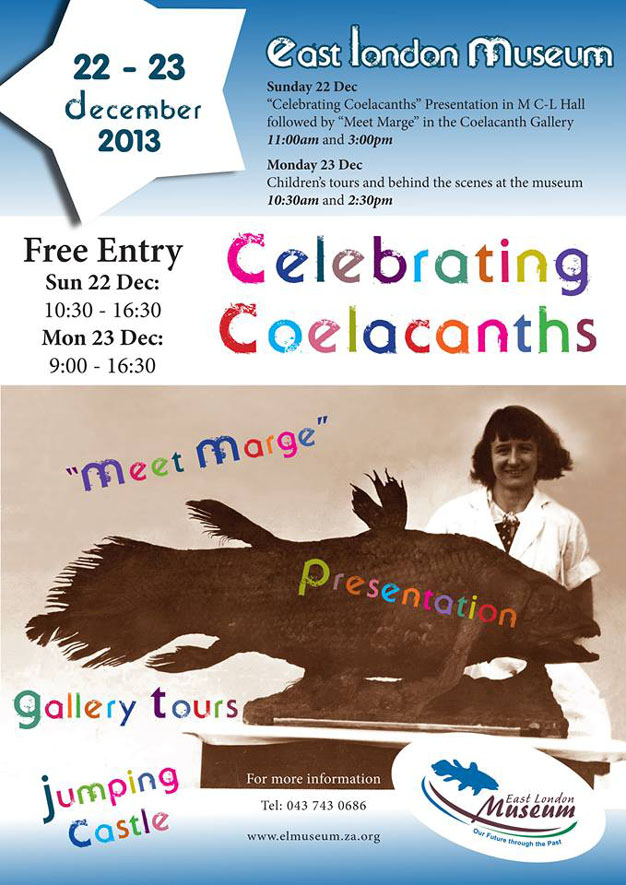 During the year, coelacanth news issued from the International Cryptozoology Museum, which has as its logo the coelacanth.

(a) As mentioned at the beginning, coelacanth keychains were offered for the first time in 2013, at the ICM. Source.
(b) Jerry Hamlin (Dinofish) visited the museum in October 2013.  Hamlin was photographed as he and I examined the new Japanese model of a coelacanth (discovered by our Assistant Director Jeff Meuse). 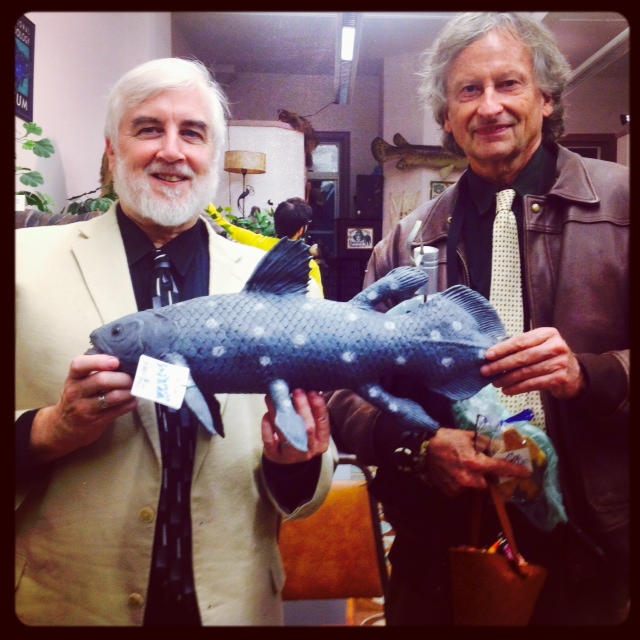 (c) This meeting was turned into a painting by Andy Finkle, which is now part of the museum’s art collection. 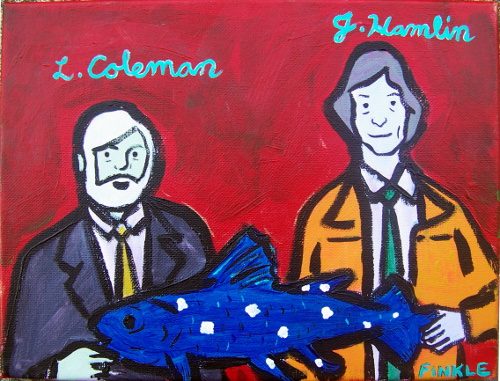 (d) I received an elaborate piece of new coelacanth art at the museum this year, produced from rescued wood by Maine artist and Maine College of Art graduate Steven Brooks. 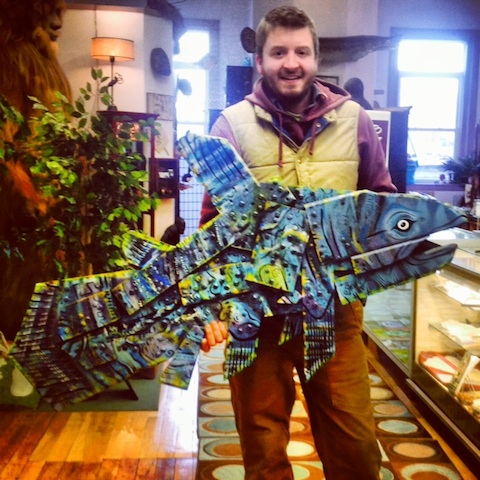 (e) The International Cryptozoology Museum’s coelacanth area was completely re-curated. Our exhibit discusses the 1952 discovery of the “second” coelacanth as the inspiration in popular culture of the 1954 movie, Creature from the Black Lagoon, thus the items from that film are displayed. We have a modest collection of coelacanth stamps, replicas, and coins. (The Portland, Maine museum continued to search for more coelacanth material for exhibition.) 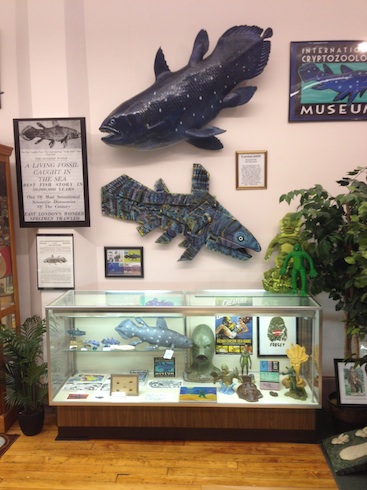 (10) Safari Ltd® issues new mini-coelacanthsIn December 2013, this blog and the museum introduced to the world the new Safari Ltd® cryptozoology toobs, which were created after we consulted with Safari in 2009-2010. Among six replicas, the toob includes a small figurine of a coelacanth, as suggested to them by me (see below, a normal SafariLtd® figurine of the coelacanth compared to their new mini-coelacanth).

All my best to Coelacanthologists and coelacanth fans worldwide for a new great discovery in the New Year! Maybe a new Gulf of Mexico coelacanth species will be found?
Please note, the projected 2014 film entitled Coelacanth is a murder mystery, and as far as I know, has nothing to do with the fish under discussion here. 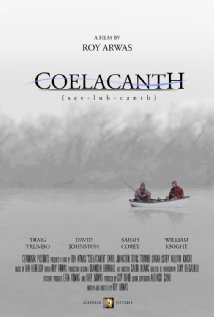 Previous Entry: Chicago Sun-Times Remembers Cryptozoologist Roy Mackal
Next Entry: Round Up of Top Bigfoot, Cryptozoology, New Species, and Other News Lists of 2013