Needless to say, due to my interest in True Giants, I am always interested in news crossing the wires of sightings of giant hominoids.

Apparently, a photograph of one that is a bit more mundane but still mysterious was taken at the funeral procession of Kim Jong II.

In a sea of indistinguishable onlookers clad in black with their backs turned to the camera, one man stood out at Kim Jong Il’s funeral.

The Associated Press released a photo of the procession in North Korea, and a hawk-eyed Reddit contributor was quick to point out an anomaly in the otherwise uniform crowd of mourners. In the photo above, one man appears to be nearly twice as tall as the gentlemen on his left and right.

Who is this giant? Could it be Ri “Michael” Myung Hun — North Korea’s national basketball star — as some commenters have suggested? Source. 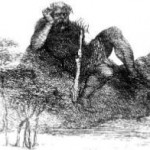