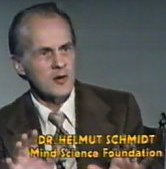 I have become aware of another Fortean death. A scientist who worked for the Tom Slick-founded Mind Science Foundation and Dinsdale Award winner has died.

Helmut Schmidt (February 21, 1928 – August 18, 2011) was a German-born parapsychologist. In the early 1970s, he pioneered research into the effects of human consciousness on machines called random number generators or random event generators at the Rhine Research Center Institute for Parapsychology. He was appointed Research Director of the Institute in 1969.

Schmidt’s early psychokinesis experiments involved machines with one red and one green light. Subjects would attempt to make one light illuminate more than another. Schmidt has reported success rates of 1–2% above what would be expected at random over a large number of trials. A metastudy that reviewed more than 800 such studies from 68 laboratories came to the conclusion that “under certain circumstances, consciousness can interact with random physical systems.”

In 1983, the journal Research in Parapsychology published a paper entitled “Superposition of PK Effects by Man and Dog” by Helmut Schmidt.

The design for the experiment was simple: a man performed a standard test of extra-sensory perception (ESP), attempting to guess what symbols were illustrated on a series of concealed cards, and a dog (a ‘supposedly non-psychic’ miniature dachshund) was rewarded with a chocolate every time the man guessed correctly. The dog was thus motivated to improve the man’s performance by psycho-kinetic (PK) means. The results showed that the man’s results did indeed improve, but the best results of all were obtained when the dog performed the ESP test on its own. The conclusion was that further research was needed.

Schmidt was a physicist who has specialized in parapsychology. He was born in Danzig, Germany, February 21, 1928. He was educated at the University of Göttingen (M.A., 1953) and the University of Cologne (Ph.D. Physics, 1958). He moved to North America in 1964 as a visiting lecturer at the University of British Columbia and stayed to become senior research physicist at Boeing Science Research Laboratory (1966-69) and a resident associate at the Institute of Parapsychology (1969-70). In 1970 he was named director of the institute, a position he held until 1973. In recent years, Schmidt became associated with The Mind Science Foundation in San Antonio, Texas, which was first founded by Tom Slick.

Schmidt was praised by critics of parapsychology as the person with the most sophisticated approach to the methodological design of parapsychological experiments. He conducted research with electronic random generators (with which he is most identified), and with E. H. Walker he proposed a “psi enhancement” paradigm in which it is suggested that psi faculty is triggered at the instant of positive feedback. He also worked with Walter J. Levy, Jr. on possible PK in chickens, cockroaches, and rats, though the studies with Levy were called into question after it was discovered that he had been manipulating data.

In 1992, Schmidt was awarded the Tim Dinsdale Award for ” Helmut Schmidt for pioneering electronic and computer techniques in the study of human-machine interactions.”

Tim Dinsdale (above), the adventurer and Loch Ness hunter, lives on in the Tim Dinsdale Memorial Award. The Dinsdale Award was established in 1992 by The Society for Scientific Exploration’s founding member, councilor, and editor of the SSE Journal, (now retired) Professor Henry Bauer, so that the SSE could recognize “significant contributions to the expansion of human understanding through the study of unexplained phenomena.”

Schmidt won the first award. William Corliss who recently died, won the second. And Robert Rines, who also recently passed away, won the award in 2004.

Some of Schmidt’s published works are,

A Suggested Method for Detecting Psi with Subjects whose Performance Fluctuates from Trial to Trial. J. Am. Soc. Psychical Research 71, 1977, 19-31.

A Program for Channeling Psi Data into the Laboratory and onto the Critic’s Desk. Progress in Parapsychology 1979 (W. Roll, Editor), 66-69.

Randomness and the Mind. Looking for Psychic Effect in Games of Chance. Creative Computing, April 1983, 180-186.

The parapscyhologist is not to be confused with the German Social Democrat Helmut Schmidt (born 1918), who served as chancellor of the Federal Republic of Germany (West Germany) from 1974 to 1982.