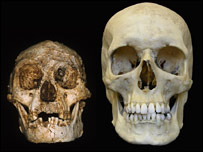 “The magazine Science…has news about FSU. ‘Recession Hits Some Sciences Hard at Florida State University.’ We have just fired 20 tenured faculty and another 15 tenure-track faculty. And don’t think that these were just second-raters or indeed presume that any of them were. Included was Dean Falk, one of today’s leading paleoanthropologists and, among other things, the expert on the brain of Homo floresiensis (the hobbit). She got a pink slip on her 65th birthday. (Disclosure: Dean is a good friend. In this post I am absolutely not making a judgment about whether, given the firings, she was legitimately included or not. If you read the Science article, you will see that decisions were made on the judged vulnerability of departments, and she is a member of one such department, anthropology.)”

I find it outrageously insensitive that Dr. Falk would be dismissed on her birthday, but then, having worked in academia, I understand the disassociative institutional behavior that results in such gestures. My condolences to Dr. Falk!

Professor Dean Falk, is shown at the cave site of Liang Bua, where Homo floresiensis was discovered.

It will be recalled that Dr. Falk undertook a study in 2005 which supported the claim that Homo floresiensis represented a new species. Falk’s original 2005 study was criticized by a few. In 2007, with an international team of scientists, Falk created detailed maps of imprints left on the ancient hominid’s braincase and concluded that the so-called Hobbit was actually a new species closely related to Homo erectus. Falk’s team have repeatedly asserted that their findings confirm that the species cataloged as LB1, Homo floresiensis, is definitely not a human born with microcephalia — a somewhat rare pathological condition that still occurs today.

On her FSU webpage, Dean Falk writes of her “Research Interests and Activities” (in her following quoted words, shown thusly to retain the italics):

Homo floresiensis (Hobbit)
application of medical imaging technology to studies of endocasts,
evolution of brain and behavior in higher primates,
neurological & behavioral substrates that preceded the evolution of protolanguage,
origins of music and language

My research focuses on the evolution of the brain and cognition in higher primates, including humans. I am currently working with my long-time collaborators at Mallinckrodt Institute of Radiology at Washington University School of Medicine in St. Louis on a comparative study of endocasts from the skulls of LB1 (Homo floresiensis) and fossil hominins. Endocasts reproduce details from the interior of the braincase that were imprinted by the exterior surface of the brain. This project is in collaboration with colleagues in Australia and Indonesia and has been supported by the National Geographic Society. My latest book (Finding Our Tongues: Mothers, Infants and the Origins of Language Basic Books 2009) develops and extends my ‘putting the baby down’ hypothesis, which associates the evolution of infant-directed speech (‘motherese’ or ‘musical speech’) with natural selection for walking on two legs (bipedalism) — the key feature that distinguishes fossils of our ancestors from apes. Human parents’ universal use of lullabies, rocking and cuddling, and baby talk are an early focus of the book. Later chapters ponder the emergence of our ancestors’ first words, grammars, and syntax; how these may have become conventionalized within populations; and how the evolution of language paved our species’ way for other creative endeavors such as art, music, and dance. I am currently writing a book about paleopolitics and the impact of two major discoveries (Taung and Hobbit) on our perceptions of human evolution.

Thanks to Dan Gannon for the tip to this news.