You are here: Home / Rangers See 20 Inch Tall Pygmies: Are They Orang Pendek? 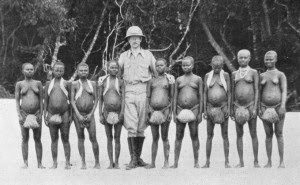 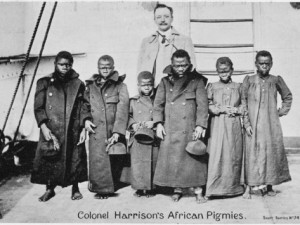 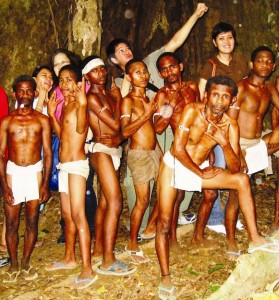 Historically, pygmies have been depicted from Africa and Asia, often, by using outside explorers as yardsticks. 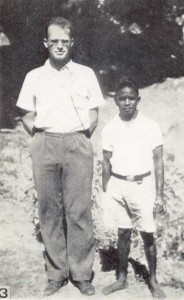 Joseph Birdsell (6 ft tall) with a 24-year old male Kongkandji Negrito (4 ft 6 in), North Queensland, Australia, 1938.
Now breaking news out of Sumatra comes accounts of the sightings of 20 inches tall pygmies. Do these have something to do with Orang Pendek encounters?
Rangers patrolling the Way Kambas National Park (TNWK) in Lampung have reported sighting dozens of pygmies in a number of areas across the park. They are being described as pygmies with dreadlocks, being only 20 inches tall and naked.
“A number of rangers claim the pygmies grow their dreadlocks down to their waist. The first sighting by the rangers was on March 17 at 6:40 p.m. local time. Apparently, many fruit trees, such as banana, guava and dragon fruit, are grown in the NTF plantation area. If the pygmies like fruit, they might have entered the plantation for food. We will try to anticipate the situation with the help of local residents and PT NTF employees. If they [local workers] come across the pygmies, they should not harm them,” said TNWK spokesman Sukatmoko.
Sukatmoko said that based on information conveyed by forest rangers, the group of pygmies consisted of around 15 individuals. When the rangers spotted them, the pygmies, believed to be an isolated group of people, were walking through a swamp.

“The rangers monitored their presence for around 15 minutes from a distance of around 35 meters. When the rangers were about to approach them, they immediately hid behind trees and vanished. They ran very fast,” said Sukatmoko.
The pygmies were seen again March 20, by the rangers, but further away and for a shorter time.
Sukatmoko said his office was unsure whether the pygmies had always lived in TNWK, or whether they were newcomers from other islands. To record their presence, the TNWK center has installed surveillance cameras in the forest.
“We can record pictures of the pygmies at night. After it’s proven they exist, we will immediately inform the Forestry Ministry, or even the President. We believe they really exist in TNWK. We’re making strenuous efforts to find them. In the event that we do, we hope the government protects them. Our rangers have seen them with their own eyes, but have yet to take pictures of them,” said Sukatmoko. 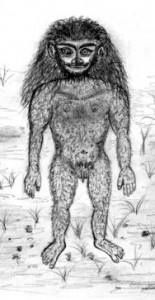 Was what W. Wheeatcroft saw in January 2008, one of these pygmies?
The center has allowed academics and researchers to track and study the group.

Debbie Martyr’s drawings, based on her sightings, may be finding a context, as well.
Indonesian Forum for the Environment (Walhi) Lampung chapter campaign director Mukri Friatna said the pygmies had been sighted in a number of forests in Indonesia, such as in Kerinci Seblat (West Sumatra), Liang Bua (Flores) and Bone (South Sulawesi). 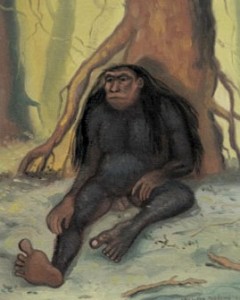 Philippe Coudray‘s illustration of an Orang Pendek.
Does this new sighting of pygmies answer some questions?
“In Kerinci Seblat, they are known as the orang pendek [short people], in Flores as Homo floresiensis, and in Bone as members of the Oni tribe. In Mount Kerinci, the creature is depicted as having inverted legs but is very agile among the dense foliage,” said Mukri.
Way Kambas National Park is located in East Lampung, and is home to the Sumatran elephant, rhinoceros, tigers and a number of other rare wildlife species.
Postscript: On March 17th, sunset in Sumatra was 6:11 pm local time; on March 20th, 6:10 pm. The best sighting on the 17th was recorded as 6:40. Bright dusk lasts for 30 minutes. Viewing was not in sunshine, but there is no way it was “dark.” They are rangers, and they should be familiar with local species. This is not an April Fools joke. This story broke in Jakarta on Sat 30 March 2013.
Thanks to Chad Arment and The Jakarta Post.
by Loren Coleman on March 31, 2013 in Breaking News, CryptoZoo News, Eyewitness Accounts, Orang Pendek, Proto-Pygmies | Tagged Orang Pendek, Pygmies, Sumatra