You are here: Home / Did Denisovan-Neandertal-Human Interbreeding Result in the Headless Valley’s Nakani? 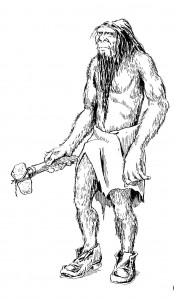 Did Neandertals breed with humans? Did the newly discovered Denisovans also have sex with Homo sapiens resulting in offspring? Certainly breaking news today, as published in and reworked in mainstream media stories (“Siberians share DNA with extinct human species,” Telegraph, November 1, 2011), seems to point to such scenarios having occurred.

Professor Mattias Jakobsson, of Uppsala University in Sweden who conducted the study together with graduate student Pontus Skoglund, is reporting in the journal PNAS that hybridization took place at several points in evolution and the genetic traces of this can be found in several places in the world.
Jakobsson told the Telegraph: “We’ll probably be uncovering more events like these. Previous studies have found two separate hybridisation events between so-called archaic humans – different from modern humans in both genetics and morphology – and the ancestors of modern humans after their emergence from Africa. There was hybridisation between Neanderthals and the ancestors of modern humans outside of Africa and hybridisation between Denisovans and the ancestors of indigenous Oceanians. The genetic difference between Neanderthals and Denisovans is roughly as great as the maximal level of variation among us modern humans.”
He added: “We found that individuals from mainly Southeast Asia have a higher proportion of Denisova-related genetic variants than people from other parts of the world, such as Europe, America, West and Central Asia, and Africa. The findings show that gene flow from archaic human groups also occurred on the Asian mainland.”

For John Hawks’ insights about the new study, see here.

As I have noted previously, in 2007, when the Denisovans were first discovered via my posting “Soviet Hominologists Were Right: Siberian Neandertals,” hominology/cryptozoology long ago indicated this kind of new information would be found. For some time, a few of us have studied various reports of what might be surviving Neandertals* in Siberia and China. Whether called Mecheny, Mirygdy, Chuchunaa, Mulen, or Wildmen, some Soviet Snowmen Commission scientists and a few Chinese in the last century theorized we might be dealing with relict populations of Neandertals. Especially intriguing are the Chuchunaa, the often clothed, eastern version of the Mirygdy, seen in Eastern Siberia.

Now we are hearing that Siberians share DNA with Neanderthals and Denisovans. No surprise here, as many of us are open to possibility that survivors of some of these ancient strains of hominoids are still around.

In a similar line of conjecture, I am pondering today if a mountain valley in Canada holds valuable clues to this question. Could the Canadian stories of the fairly human-like Bushman or Nakani be an indication of evidence of interbreeding taking place around the Headless Valley of as demonstrated through traditional folklore and modern sightings?

As opposed to confusing this with modern reports of Sasquatch/Bigfoot, of course, I have routinely proposed that another group of hominoids, Neandertaloids, still exist in the wild. One of the main reasons that Patrick Huyghe and I wrote our field guide was to split in groups/types, not lump, all of these stories. Analysis of the material has indicated that what is being found in paleoanthropology and palaeoarchaeology, which is that “we have never been alone,” and, indeed, these groups may still be with us, is exactly what many of us have discovered through hominology. Take a look, open-mindedly, for a moment, again, at the Nakani.

The Canadian Northwest Territories’ Bushman, Nakani, or Nuk-luk, as drawn by Harry Trumbore (small at top, larger at the bottom), from The Field Guide to Bigfoot and Other Mystery Primates.

George Eberhart’s excellent cryptozoology reference work, Mysterious Creatures is perhaps too expensive (from 2002 at $185) to be in most researchers’ collections, but should be in every library in the country.

Eberhart wrote an entry for the Bushmen or Nakani, which overviews, as I did in my field guide, one of the rare examples of a group of hairy hominoids employing discharged clothing and boots formerly used by humans.

Below is Eberhart’s entry:

Behavior: Usually nocturnal. Swift runner. Only active in summer or fall. Lives underground or in a den in the winter. Call is a high-pitched whistle or laughing sound. Nauseating odor. Steals dried salmon from smokehouses. Said to wear hard-soled shoes and a head scarf. Makes signal fires. Said to have a hypnotic power. Throws rocks and sticks as weapons. Kidnaps women and children.

Tracks: Human-like, but longer and narrower. Sometimes shoe-prints are found.

Significant sightings: Paul Peters watched a Bushman along the Yukon River near Ruby, Alaska, in the fall of 1960. It was walking along the rocky beach toward his dogs, which were whining and acting strangely. The Bushman was very muscular, covered in black hair, and about 6.5 feet tall.

John Baptist saw a man-like creature with a long, dark beard near Fort Liard, Northwest Territories, in April 1964. It uttered a wild growl and fled, leaving tracks. The following month an Indian woman saw the same wild man, and in June outside Fort Simpson a 14-year-old boy and his father saw a small, dark creature with a long beard who carried a stone club and wore a piece of moose skin around his waist.

Patty Nollnar and six other villagers of Nulato, Alaska, encountered a Bushman in 1970 along the Koyukuk River about 20 miles north of its confluence with the Yukon. They didn’t see it, but it threw a rock at them as they were resting around their campfire.

Distribution: British Columbia; Canadian Northwest and Yukon territories; southern Alaska; and around the Yukon and Koyukuk rivers in central Alaska.

As I go on to mention in the Coleman-Huyghe field guide, these Northwest Territories reports were gathered by Ivan T. Sanderson’s associate Frank Graves of the American Expeditionary Society. Both Mark Hall and I, in searching the files of the old Society for the Investigation of the Unexplained (SITU), discovered the records of Graves’ notes there.

Graves was looking into the accounts from the Nahanni Valley, the “Headless Valley,” so-called because of the strange vanishings and decapitations of prospectors there for over 200 years. Indeed, a dozen men had disappeared from there since 1904, and four bodies were found without their heads.

The folklore of the almost human-like phantom hairy Bushman, the disappearances from that area, and the beheadings from the “Headless Valley,” have entwined for decades. The finds of bootlike footprints and the clothing-borrowing habits of the Nakani all seem strangely related to the big picture there.

Considering this is said to be occurring in one of the most regularly frigid settings for humans and hairy hominoids, it may be an incidence of adaptive evolution and cooperation taking place rather subtly.

It is an area of research ripe for future investigations by youthful hominologists and cryptozoologists willing to journey north to continue the quest.

*Footnote about the spelling of “Neandertal”: I follow the revised scientific and modern German spelling of Neandertal. The British media and UK scientific journals still follow the old way of spelling the common name as “Neanderthal.” Therefore, in general, the American media are confused in how they spell it. But for me, it’s been “Neandertal” for years. I highly recommend anthropologist John Hawk’s blog entry, “Neandertal or Neanderthal?” for the specific reasons why it is so uncool to use the “th.”