You are here: Home / Egyptian Cobra Escapes From Bronx Zoo

Egyptian cobras grow as big as 8 feet long, though a more normal range is 5 to 6 feet long. The Egyptian cobra is a type of Naja species, specifically Naja haje, found in Africa and the Arabian Peninsula. It is one of the largest Naja species.

The reptile house at the Bronx Zoo remains closed while the search goes on for a snake that escaped. Staff noticed the 20-inch Egyptian cobra was missing Friday afternoon, March 25, 2011, and immediately sealed the Reptile House.

The Egyptian cobra was represented in Egyptian mythology by the cobra-headed goddess Meretseger. A stylized Egyptian Cobra — in the form of the uraeus representing the goddess Wadjet — was the symbol of sovereignty for the Pharaohs who incorporated it into their diadem. This iconography was continued through the period of Ptolemaic Egypt (305 BC-30 BC).

Most ancient sources say that Cleopatra and her two attendants died by suicide by being bitten by an aspis, which translates into English as “asp.” The snake was reportedly smuggled into her room in a basket of figs. Plutarch wrote that she performed experiments on condemned prisoners and found aspis venom to be the most painless of all fatal poisons. This “aspis” was probably Naja haje (the Egyptian cobra). However, the accounts of her apparent suicide have been questioned, since death from this snake’s venom is relatively slow, and the snake is large, so it would be hard to conceal.

The story of Cleopatra has had a long history in popular culture and several movies have been made about the Queen of Egypt. Perhaps the most popular is the film made in 1963 with Elizabeth Taylor in the title role. Movie actress Elizabeth Taylor passed away early Wednesday morning, March 23, 2011. She was 79. 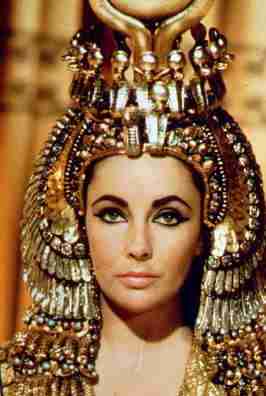