You are here: Home / Mothman Sightings Continue And Cryptotourism Soars

The Mothman, as illustrated by artist Bill Rebsamen, was created for the cover of Mothman And Other Curious Encounters. This is the image that the late Linda Scarberry said looked the closest to any she had ever seen made.

September 16, 17, and 18, 2011, was the weekend of Point Pleasant’s Mothman Festival. The events celebrating the sightings of Mothman in 1966-1967, have created a new cryptotourism industry in that small West Virginia Ohio River community, which was dying before the movie came out in 2002.  Click here for their local page on the Mothman Festival.

As we move into the 10th year since the film appeared and the start of the 45th year since the modern-era Mothman sightings, I thought it might be a good time to reflect on comments I made in 2002 to USA Today.  It has come to my attention that a citation to this article was just added to Wikipedia’s entry for Mothman by some anonymous Wiki-editor. The news item was, in part, about how the sightings have already and will continue.  I further noted I felt Point Pleasant would become a mecca for travelers. Intriguingly, during all my recent visits to Point Pleasant (in 2001, 2002, and 2011), people there openly discussed the continuing sightings of Mothman.

Loren Coleman, with visitors and Ken Gerhard, at the Mothman Museum in Point Pleasant, March 2011.

I also want to take this opportunity to agree with author Andy Colvin about this one simple fact: The sightings are still taking place today and did not stop with the Silver Bridge collapse in 1967.

Here is a reprint of that old predictive article: 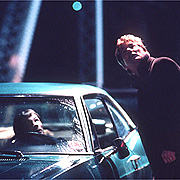 Until now, the Mothman has been known only to a devoted, cultlike few. That’s certain to change with The Mothman Prophecies, out Friday and starring Richard Gere. The otherworldly 7-foot, red-eyed, winged apparition known as Mothman might even become a pop-culture totem, like Bigfoot.

John A. Keel’s The Mothman Prophecies is based on paranormal events the author experienced and studied in Point Pleasant, W.Va., in 1966-67, while writing about UFOs for Playboy. It’s not giving away too much to say the residents were hearing and seeing things, culminating in a bridge collapse that cost 46 lives.

Because the thriller is advertised as “based on true events,” Keel,Mothman director Mark Pellington and Mothman expert Loren Coleman (featured at 10 ET/PT Wednesday night on the FX channel documentary Searching for the Mothman) reveal the “truths” behind the film.

“Maybe we should have said ‘inspired by true events,’ ” a cheerful Pellington says.

Says Coleman, who has published a book on the “dark and sinister” subject: “Pellington’s made it a psychological thriller and not a monster movie. With this movie, Point Pleasant will become like Roswell and explode with tourism.”

But a few truths are out there:

Says Coleman, who interviewed one of them: “A huge creature about 7 feet tall with huge wings and red eyes shuffled toward them, they ran to the car, and at 100 mph drove back to Point Pleasant. They could see the creature flapping right behind them.”

Says Keel, 72: “The book tells what happened to me. Alan Bates gives a Keel speech, almost word for word, of what I’ve been saying for years.”

The real Keel, unlike Gere’s Klein, was nowhere near the bridge that day. “I knew the exact time it was going to happen, but you couldn’t warn anyone because it might cause a panic, and it might not be true.”

He knew because “I was getting these damned mysterious phone calls, just like in the movie.”