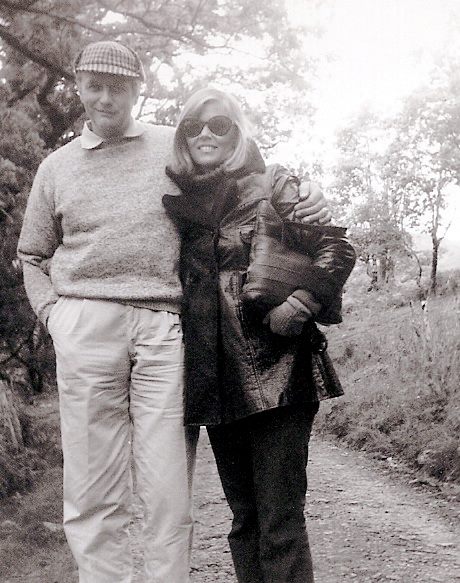 Update: On August 1, 2015, on the occasion of the late Roy Mackal’s birthday, his former wife, Lillian Olson Mackal sent me a photograph of the two of them, happily together at Loch Ness. I share it here, in renewed celebration of the late, great cryptozoologist.

++++ Following is my earlier, breaking story of the discovery of the passing of Roy….

In a great loss to cryptozoology, Dr. Roy P. Mackal has passed away.

Roy P. Mackal  was born August 1, 1925, in Milwaukee, Wisconsin. For many years, Mackal was a University of Chicago biologist best known to the general public for his search for Loch Ness Monsters, Mokele-mbembes and other cryptids.

The mainstream media outlets have not written tributes for him, and this is a sad oversight.  He is a figure that needs to be recalled, and his life remembered.

Allegedly, funeral arrangements are still pending in the Chicago area.

Mackal served in the United States Marine Corps during World War II before attending the University of Chicago, where he received his B.S. in 1949 and his Ph.D. in 1953. He spent the rest of his academic career with Chicago as an instructor and researcher until retiring in 1990. Much of his early research with the university was in biochemistry and virology, and during the 1950s, 1960s, and 1970s, he contributed to the university’s influential “virus project,” studying bacteriophages and the lysogenic cycle. He later served as a professor of zoology. 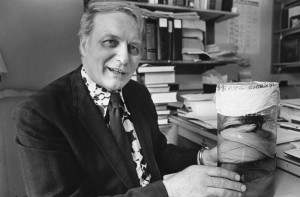 Little known to many, Mackal held several patents, which provided some income in his later years. As noted in 1999, in my book – written with Mackal’s dear friend Jerry Clark - Cryptozoology A to Z, Mackal’s biochemical research, much of it DNA-related, brought Mackal international recognition. As an engineer he developed numerous technical innovations, including the design and construction of automatic parachute and recovery systems for sounding rockets and a hydrogen-generation device for weather balloons.

Mackal maintained homes in San Diego, where he would go in the winter, and the Chicago area, until he closed the Illinois home in 2000. Mackal was reportedly married four times.

Mackal began his serious research into the Loch Ness Monster phenomenon during the 1960s. While vacationing in London in 1965, he took a trip to the Scottish Highlands and met several members of the Loch Ness Investigation Bureau, who were monitoring the loch in observation vans in hopes of seeing the creature. Fascinated by their work, Mackal began monitoring the waters himself and, after raising money in America, became the scientific director for the project, a position he held from 1965 until 1975. During this time, the LNIB conducted sonar probes of the waters near Urquhart Bay and installed underwater strobe cameras with the hopes of providing evidence of the Loch Ness Monsters. 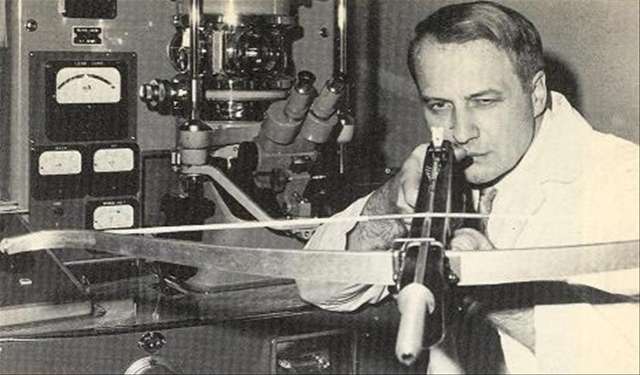 Mackal designed a “biopsy harpoon,” a dart-like DNA collection tool he envisioned using on a Nessie in order to collect tissue samples.

Mackal was a member of the 1969 World Book Expedition to Loch Ness, in conjunction with the use of Dan Scott Taylor’s one-man submarine. Taylor reported contact with a large underwater animate object that may have been one of the cryptids in Loch Ness. 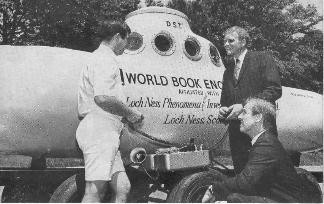 The team never had an opportunity to use the biopsy harpoons, and were unable to provide any conclusive evidence that the Loch Ness Monsters existed. Mackal himself was convinced that something lived beneath the waters after recording his own sighting of the creature in 1970. 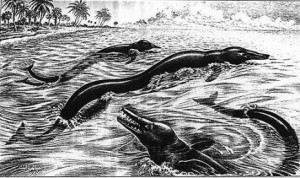 In 1966, Mackal had suggested an amphibian as the source of the Loch Ness Monsters. Then, in his The Monsters of Loch Ness (Chicago: Swallow Press, 1976), he theorized that a population of large invertebrate living fossils were living in the loch. Mackal later changed his mind and proposed that the creatures were zeuglodons, ancient serpentine whales. Mackal speculated that these temperate-zone lake and loch monsters – with access to the oceans via waterways – were relics of an early era, related to zeuglodons, primitive cetaceans  thought to have died out 20 million years ago.

Mackal was widely considered to be one of the leading figures in cryptozoology, and authored Searching for Hidden Animals (NY: Doubleday, 1980).  Along with writer Richard Greenwell and Belgian zoologist Bernard Heuvelmans, he was one of the founding members of the International Society of Cryptozoology, which was created in 1982 at the National Museum of Natural History in Washington, D.C., hosted by zoologist George Zug. The organization published a quarterly newsletter and an annual journal, and members met yearly at meetings held at universities throughout the world. Mackal was the ISC’s vice-president for the entirety of its existence, until the organization gradually folded in the early 21st century owing to lack of funding and the deaths of Heuvelmans and Greenwell. In the 2000s, he would not allow others to re-form the group casually, as contracts and charters were being ignored, Mackal said. 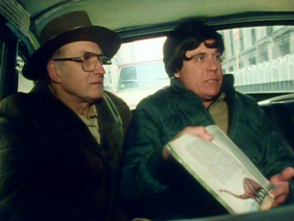 During the 1980s, Mackal turned his attention to another legendary cryptid, Mokele-mbembe, an alleged living dinosaur in the Likouala swamp region of the Republic of Congo. 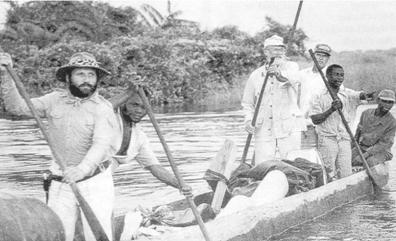 Accompanied by University of Arizona ecologist Richard Greenwell and Congolese biologist Marcellin Agnagna, Mackal undertook two expeditions, the first in 1980 and the second in 1981, to find and photograph the creatures. Mackal himself did not observe any Mokele-mbembes, but he and his colleagues did collect multiple firsthand reports from Congo natives, who, according to Mackal, consistently described a creature similar to a long-necked sauropod. During his interviews with the local peoples, Mackal also heard anecdotes about the Emela-ntouka, another possible living dinosaur which supposedly resembles a Monoclonius or Centrosaurus, the Mbielu-mbielu-mbielu, which is said to resemble a Kentrosaurus, and the snake- or lizard-like Nguma-nonene. 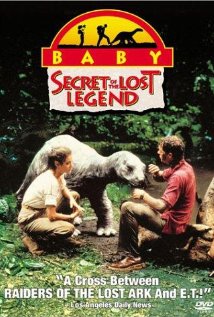 The juvenile fictional movie Baby: Secret of the Lost Legend (1985) was based on Roy Mackal’s pursuit of Mokele-mbembe.  But Mackal was portrayed in the movie as an evil villain, out to catch and exploit the first dinosaur captured. 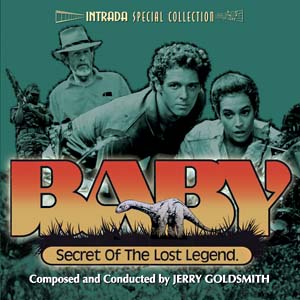 “Dr. Eric Kiviat,” as you will notice from Patrick McGoohan’s bearded presence (above), in the Mokele-mbembe movie, Baby, even looks remarkably like Dr. Roy Mackal (below), the Mokele-mbembe expedition leader to the Congo. (The character name could have been a pun of the name of a producer, Robert Kiviat, well-known at the time for his Unsolved Mysteries segments, and later infamous for the Alien Autopsy fiasco.)

Roy Mackal, shown with the beard, in pursuit of cryptids in Africa.

Mackal also searched for the Kongamato, a large flying cryptid, in Africa in 1988. He further gathered data on contemporary sightings of Dodos off the coast of the continent. 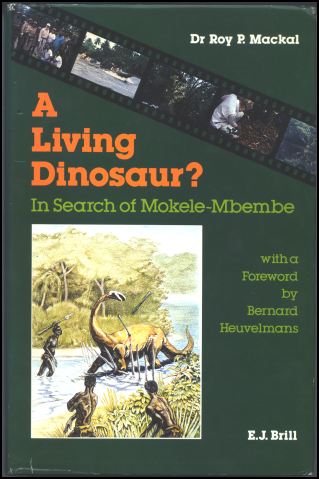 Mackal wrote a book about his adventures in the Likouala swamps called A Living Dinosaur? In Search of Mokele-Mbembe (NY: E. J. Brill, 1987).

One of the major contributions Mackal made was as an academic in cryptozoology. As an early leader in the field and a professor, he often had to endure ridicule and unprofessional treatment at the hands of his fellow academics, merely for being interested in cryptozoology.

This intolerance is reflected in a passage where Mackal is mentioned in Eccentrics: A Study of Sanity and Strangeness by Dr. David Weeks and Jamie James:

An excellent example of the value of eccentric science is provided by a group called the International Society of Cryptozoology, which is dedicated to searching for animal species not recognized by conventional science.  Members of the group have organized expeditions into the wilderness of Northern California in search of Bigfoot, and to Scotland in pursuit of the Loch Ness Monster.  Roy Mackal, a biochemist at the University of Chicago and the society’s vice-president, is a believer in the existence of Mokele-mbembe – a huge beast that, legend holds, lurks in the swamps of the Congo jungle.  Mackal contends that it may be a relict sauropod, a semiaquatic dinosaur of the Cretaceous period.  In 1987 he published A Living Dinosaur? an account of Mokele-mbembe.  He found no monster, but he did hear a lot of stories from the local people.  The book is filled with unintentionally ridiculous photographs, such as a picture of an empty pond with the caption, ‘Monsterpool where a Mokele-mbembe had been for several weeks’.  Another photograph, showing an empty patch of jungle, is captioned ‘Path through underbrush made by Mokele-mbembe getting to the river’.

In the newsletter New Scientist, in an editorial “The call of the weird: In praise of cryptobiologists” by William Laurance, June 22, 2011, the ridicule factor in Mackal’s life is referenced:

…being a cryptobiologist isn’t easy. Some have paid for their efforts in more than money. Roy Mackal, a dedicated chaser of Nessie and Mokele-mbembe, an aquatic dinosaur that supposedly lives in the Congo basin, was booted out of the biology department at the University of Chicago; few if any dispute that his cryptid-seeking was the chief cause. Others endure sneers from their colleagues, a loss of credibility and even academic isolation.

Because Mackal had tenure, he could not be “fired,” per se, when his cryptozoological efforts started gaining international celebrity for him. An embarrassed University of Chicago biology department, allegedly, merely gave Mackal a lateral transfer, placed him in charge of facilities management, and moved him to an office in a hidden corner of the university.

Dr. Roy Mackal dedicated his life to new knowledge, through biochemistry, design innovations, and cryptozoology. He will be remembered with great affection and sincerity by his colleagues and friends for his healthy and enthusiastic optimism as well as his analytical and practical intellect. He will be deeply missed.

* The indications are fleeting that Dr. Roy P. Mackal has died, but they include: (1) the Thompson & Kuenster Funeral Home website of Oaklawn, Illinois, posted a tiny obituary noting “Roy Mackal” died “September 13, 2013″; the guest book at the Illinois funeral home was visited by California friends who talk of Roy’s romantic love of the unknown; an individual claiming to be Mackal’s grandchild edited the “Roy Mackal” entry Wikipedia on September 19 and said that Mackal “passed away last weekend,” according to a paleontologist contact; and attempts to reach Mackal via his phone number were unsuccessful. Mackal should have had published obituaries in the San Diego and Chicago newspapers. If he has not, this is a major mainstream media void!

The Chicago Sun-Times, based on the above, investigated and published a worthy tribute. See here.

See also “The Death of the Mokele-Mbembe Seekers.”