You are here: Home / L. Coleman Appears On “Bones”

2014 Update: Travis J. Hill passes along the news that on December 27, 2014, this episode is being rebroadcast today. 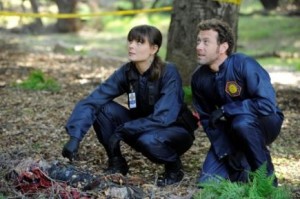 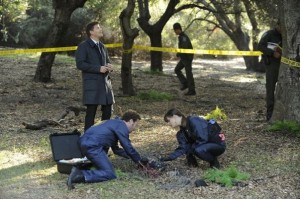 Brennan (Emily Deschanel, R), Booth (David Boreanaz, L) and Hodgins (TJ Thyne, C) investigate the death of a man thought to be killed by a cryptid “Chupacabra” in “The Truth in the Myth” episode of “Bones,” which aired on Thursday, April 14 (9:00-10:00 PM ET/PT) on FOX. Cr: Ray Mickshaw/FOX. Used for promotional purposes.

Rumors of my death are greatly exaggerated. The messages started coming late on Thursday and early Friday, and I was surprised by them. Word is that “I” was mentioned as a victim of a cryptid on “Bones.”

Here is a sample of the emails that have been received:

I don’t know if you watch BONES, but it’s on right now and this particular episode happens to be about the Chupacabra. Basically, a debunker named Lee Coleman goes off in search of the Chupacabra to debunk on an episode of his show. I found it too uncanny that the corpse-in-question has a name similar to yours and is on the hunt for an elusive cryptid. Just wanted to give you the heads up. Tina Sena

Watching “Bones” episode on cryptozoology. A lot of fun, with a kind of backward homage to leading American cryptozoologist Loren Coleman, with “Lee Coleman,” a debunker of cryptozoology, killed allegedly by the “Chupacabra,” and Agent Booth insisting to the always-skeptical Dr. Brennan that he personally sighted a Yeti in Nepal.Matt Bille

Did you watch BONES on tv last night?!? It was about this ‘myth breaker’ guy who went around debunking cryptids, etc. His name was Lee COLEMAN. He was supposedly killed by a chupacabra. He didn’t have a beard, but come on. Then there was his nemisis, I forget his name, who was a suspect in Coleman’s death, who was the one who tried to prove the existence of cryptids, etc. That’s the guy that should have been named Coleman, but this is tv. But anyway, cryptozoology got a nice plug for an hour. Phyllis Mancz 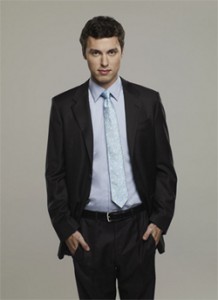 At the official “Bones” site, these notes can be found about this episode (6:18), which is entitled “The Truth in the Myth” (co-written by John Francis Daley, who plays psychologist Lance Sweets on “Bones,” and Jonathan Goldstein, a Americo-Canadian author):

Booth figured he had to be a tourist because of his clothing. He sent his description to local hotels and someone responded with a match. Lee Coleman was staying at the Pine Tree Manor. He disappeared, leaving all his things behind. Booth recognizes the name Lee Coleman but Brennan does not. Lee Coleman is the host of Kill the Myth, a television show on the Wilderness Network. He debunks various myths and legends. He was likely in the woods for his show, trying to disprove the existence of the chupacabra. 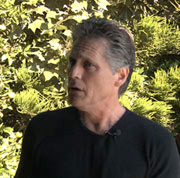 This episode’s “Lee Coleman” is played by Leigh McCloskey.

Booth and Brennan eat at the Diner and watch footage from Lee Coleman’s program. He often used hidden cameras in his work. Perhaps there are hidden cameras in the forest where he was killed! Brennan believes everything has a reasonable explanation but Booth does not agree. He tells her he saw a Yeti in Nepal. Brennan dismisses it as a hallucination but is troubled when this upsets Booth.

Nadine Tweed visits Booth at the FBI. She realizes there may be another suspect and he could be after her too. Terry Bemis used to have a show on the Wilderness Network. He is a famous cryptozoologist and Lee Coleman had him kicked off the network. Nadine stopped working for Terry and started working for Lee. Terry made threats but she received a disturbing email from him just yesterday: “Heard about Lee. Some people get what they deserve, I guess. Wonder how things will turn out for you?”

Furthermore, the “real” cryptozoologist shows up,

Brennan shares with Booth that there is a logical explanation for what he saw in Nepal: Ursus Arctos isabellinus. It is a seven-foot tall bear covered in ice. She believes Booth saw what he saw. He is just calling it by the wrong name. Booth is grateful she gave him the benefit of the doubt.

Booth and Brennan watch a taping of Seeing is Believing, the low budget show hosted by Terry Bemis on a public access station. As soon as he sees Brennan, he invites her on camera to be interviewed, toting her as one of his frequent guest scientists. Brennan immediately tells him she doesn’t believe he is a scientist. He is also a suspect in the murder of Lee Coleman. Terry cuts to a commercial.

At the FBI, Sweets interrogates Terry Bemis. He insists the email he sent to Nadine meant nothing. He was simply angry about losing his show. He also lost an imminent publishing deal to spread his findings. He could have legitimized cryptozoology. Lee destroyed his life. Yet, he didn’t kill Lee: the chupacabra did it for him. Terry doesn’t think the FBI will find the creature. With all the tourists headed there, it’ll be long gone by now.

In this episode, the cryptozoologically-aligned actors are R.F. Daley as Terry Bemis; Leigh McCloskey as Lee Coleman; and Jo Anne Worley as Diane Michaels. (See also.)

Your support of the labor to create this blog is greatly appreciated, and critically needed.