You are here: Home / Lions On The Lamb?

Lions On The Lamb? 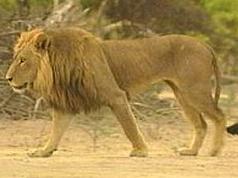 Is this the complete picture?

It has been a busy month. Besides reports of mystery black cats around Willow Creek, California, and seemingly out-of-place tanned ones around the Western USA, there seem to be others of some interest to us. What’s happening in Scotland, Ohio, and Texas lately?

What is one to make of an African lioness in Scotland?

A retired academic believes he spotted the big cat roaming the Kilsyth Hills, north of Glasgow. Although there have been more than 2,100 sightings of pumas, panthers, and lynxes in Britain – with 125 in Scotland – Dr Bob Sharp’s sighting, on April 22, [2010] is believed to the first of a Panthera leo.

Tired of the old circus train wreck explanation? The Columbus Dispatch published the following new one this week:

Authorities say a mountain lion is on the loose in southern Ohio. After receiving at least two calls yesterday morning about the animal, the Brown County sheriff’s office learned a resident bought a mountain lion at a flea market and it had gotten away about a month ago.

The question I wanted answered in this article was a simple one. What did the “lion” look like? Did it have a mane? A black tip on its tail? Or was it only tan-colored? Ask the question.

Authorities are on search for a lion in Marshall, Texas, tonight [May 27th].

Marshall Police tell us they started getting phone calls of a lion on the loose near the train depot as early as 9 a.m. Thursday morning.

Marshall Police have been patrolling the area around the depot where witnesses reported seeing the 300 pound cat.

Animal control and police are searching the area of North Washington.

Some even carried high powered rifles in case the animal had to be taken down, and locals were warned by authorities to stay inside.

“They were telling us to stay close to the building, stay indoors because that possible threat really is there,” says Shawn Hagerty, Marshall resident.

After several hours of tracking, no sign of the big cat.

Wildlife experts say it was most likely a large bobcat or even a cougar.

So far, no reports of anyone who has “misplaced” an African lion. If you think you see the lion, don’t approach it, contact police immediately.