You are here: Home / On the Track of the Kumbway

On the Track of the Kumbway 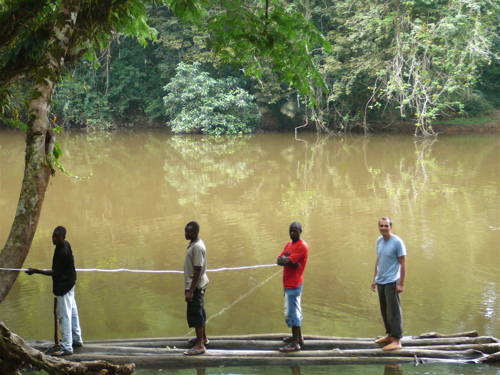 John-Mark Sheppard (above, right), writing from Liberia, shares the following information about another armored cryptid as yet unrecorded in the cryptozoology literature.

Although Sheppard speaks below in terms of the “reptilian” nature of this cryptid, the reported appearance of hairs might point to the mammalian origins for these reports, e.g. Pholidota: the pangolins (shown in the two images below). However, such an answer does not address all the issues raised by the descriptions given of the Kumbway. 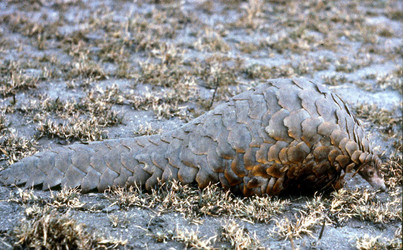 There is a Liberian cryptid known in the Mende language as Kumbway. This reptilian creature is less widely known than the Gbahali.

The Kumbway lives in swampy areas of the deep forest of Vahun District, Lofa County. The uncle of one of my staff named Samuel Carmo was a hunter in the Vahun district. In 1988 he killed one near his village of Segemah near the Sierra Leone border. He apparently had been stalking it for several days when he came across it early one morning.

When it saw him, it crouched down in the grass, leaving only its armor-like back exposed. His shotgun would have been ineffective at this point. Then animal then reared up on its hind legs to attack him. Luckily for him, he was able to shoot it in its mouth, killing it instantly. He hurried back to his village and recruited three other men to help him carry it home. An old man in the village remarked that these creatures were more common in the past, but had become very rare in the recent years. They then butchered the animal and the villagers, including Samuel, ate it.

Samuel described the animal as being between 15-20 feet long. One of its most notable features is the thick armor-like plating on its back with a distinct brown and black pattern. There also is a row of 1/2” serrated spines running down its back to the end of the tail. In contrast to its heavily protected back, the underbelly is soft and is covered with a whitish hairs about an inch and a half in length. These hairs can also be seen on its snout. The teeth are very large (about the size of a man’s thumb).

The Kumbway has powerful hind legs which allow it to rear up occasionally. They are said to be ambush predators, their diet probably consisting primarily of ground hogs and small forest antelope. The legs extent straight underneath the belly, in contrast to lizards and crocodiles. They have thick, powerful claws that allow them to dig large borrows, probably in which to lay its eggs. Other animals like giant pangolins may take up residence in these borrows after they are abandoned by the kumbway.

I actually visited the village on a recent survey trip for my program, but the uncle had left for Sierra Leone, and had not been seen for two months. I hope to return there in the coming months to interview him personally about this animal.

As for actually seeing one of these creatures with my own eyes; that is extremely unlikely. It would be like finding a needle in the proverbial haystack. The forest in which they live also contains other large animals such as forest buffalo, pigmy hippos, leopards, and elephants; yet one could go for weeks in the forest without seeing any of these well-documented animals. The area is very large and the forest is extremely dense.

Recently I was able to take a UN helicopter to travel from Lofa to Monrovia. As we flew over Liberia’s seemingly endless rainforest, with its cloud covered mountains (below), and its winding rivers meandering under the forest canopy (below), I was reminded again of how much of Liberia remains to be explored. Who knows what is still out there waiting to be discovered? ~ John-Mark Sheppard, in personal correspondence to Loren Coleman, December 2007. 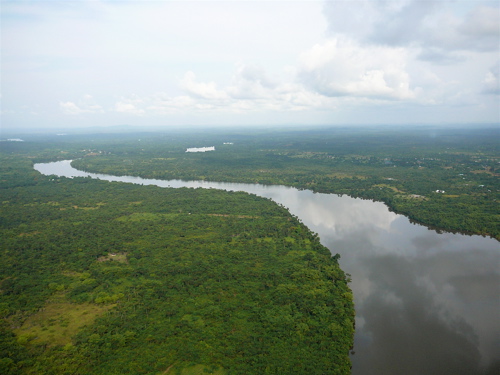 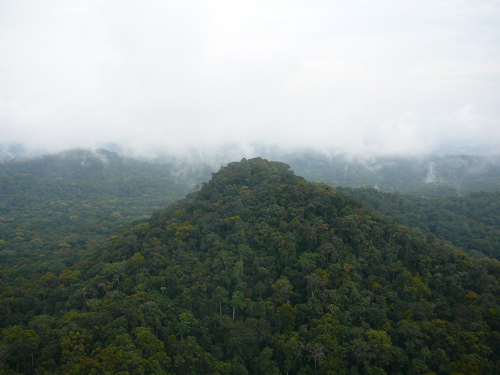