James Tanner with an ivory-billed woodpecker.

Putative audio recordings of the Ivory-billed Woodpecker (Campephilus principalis) are presented along with discussions of the videos from which they were extracted and the observations that were made when these data were obtained. On two occasions, high-pitched calls were heard coming from the direction of a bird that was identified in the field as an Ivory-billed Woodpecker. These calls seem to match the description of an alarm call that was reported in the 1930s. One of the videos captured a series of the high-pitched calls, which sound similar to the Blue Jay (Cyanocitta cristata) bell call but do not match published sonograms of that call. A putative double knock, which is characteristic of the Ivory-billed Woodpecker, was captured in another video a little over a minute before a large bird with characteristics consistent with an Ivory-billed Woodpecker flew into view. Since it is extremely difficult to observe this critically endangered species, information on audio clues could have an impact on its conservation.

Go to Source for access, for a fee, to the full article, © 2011 Acoustical Society of America.

The ivory-billed woodpecker was thought to have duck-like flaps in which the wings remain extended throughout the flap cycle. One of the videos revealed radically different flaps in which the wings are folded completely closed in the middle of the upstroke. The images from the video show the wing motion from two angles. The photo in the upper right, which was obtained by James Tanner in 1939, shows an Ivory-billed Woodpecker in flight and contains a clue suggesting that there had been a misconception about the flap style. (Credit: Dr. Michael Collins) 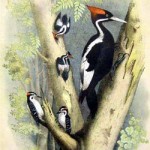 The summary of this news is…

Dr. Michael Collins, Naval Research Laboratory scientist and bird watcher, has published an article titled “Putative audio recordings of the Ivory-billed Woodpecker (Campephilus principalis)” which appears in the March issue of the Journal of the Acoustical Society of America. The audio recordings were captured in two videos of birds with characteristics consistent with the Ivory-billed Woodpecker. This footage was obtained near the Pearl River in Louisiana, where there is a history of unconfirmed reports of this species. During five years of fieldwork, Collins had ten sightings and also heard the characteristic “kent” calls of this species on two occasions.

Scientists working independently in three states have now published articles that report multiple sightings of and various forms of evidence for this elusive species, which is extremely difficult to observe and photograph due to its rarity, wariness, and tendency to roam over wide areas in remote swamp habitat. The two previous articles present findings from Arkansas [Fitzpatrick et al., Science (2005)] and Florida [Hill et al., Avian Conservation and Ecology (2006)].

During two encounters with an Ivory-billed Woodpecker, Collins heard high-pitched calls that seem to match the description of an alarm call that was reported by James Tanner in the 1930s but was never recorded. On both occasions, the calls came from the direction of the bird and began at a moment when the bird was alarmed. Several of these calls were captured in the first video, which received a positive assessment from an independent expert, Julie Zickefoose, whose paintings of Ivory-billed Woodpeckers have appeared on the covers of a leading ornithology journal and the leading contemporary text on this species. According to Zickefoose, the large woodpecker in the video has a large crest, large bill, long neck, and rared-back posture consistent with an Ivory-billed Woodepecker, and it has ponderous and heavy flaps and takes an unusual flapping leap that is unlike anything she has seen from a Pileated Woodpecker (the only other large woodpecker in Louisiana).