You are here: Home / Were Hobbits Relict Homo erectus? 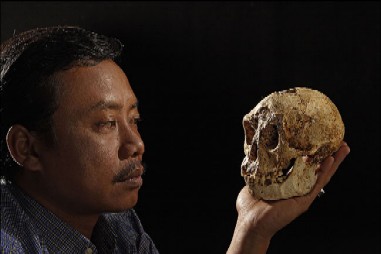 According to a new analysis of the skull of Homo floresiensis, it appears that the Hobbits might have been a group of small Homo erectus, relict, in terms of surviving and evolved, not “primitive.”

“Abstract: Since its first description in 2004, Homo floresiensis has been attributed to a species of its own, a descendant of H. erectus or another early hominid, a pathological form of H. sapiens, or a dwarfed H. sapiens related to the Neolithic inhabitants of Flores. In this contribution, we apply a geometric morphometric analysis to the skull of H. floresiensis (LB1) and compare it with skulls of normal H. sapiens, insular H. sapiens (Minatogawa Man and Neolithic skulls from Flores), pathological H. sapiens (microcephalics), Asian H. erectus (Sangiran 17), H. habilis (KNM ER 1813), and Australopithecus africanus (Sts 5).

“Our analysis includes specimens that were highlighted by other authors to prove their conclusions. The geometric morphometric analysis separates H. floresiensis from all H. sapiens, including the pathological and insular forms. It is not possible to separate H. floresiensis from H. erectus. Australopithecus falls separately from all other skulls. The Neolithic skulls from Flores fall within the range of modern humans and are not related to LB1. The microcephalic skulls fall within the range of modern humans, as well as the skulls of the Neolithic small people of Flores. 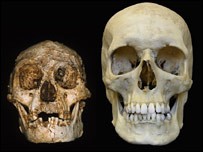 The articles bottomline is clear: “On the grounds of this morphological similarity we agree with the phylogenetic schemes that suggest a close relationship between the Flores hominin and H. erectus.”

The pdf can be found here.