Bill Gibbons, author of Mokele-Mbembe: Mystery Beast of the Congo Basin, has forwarded breaking news of a new Ogopogo sighting. He writes of his sighting, Dave Woetzel’s, and their families, following. Bill is driving the boat and Dave is the other individual in the photo below: 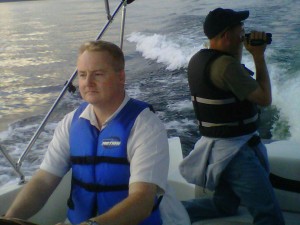 Here is the Ogopogo sighting made by Bill Gibbons, Dave Woetzel and their families on Saturday, July 2, 2011. [See the new update here.]

We met on the afternoon of Saturday, July 2nd at the Okanagan Lake Resort, 2751 Westside Road, Kelowna, where both our families were staying for the weekend. After dinner, we decided to rent an 11-seat powered boat to explore the lake, but only had an hour left before the boat had to be returned to the resort boat rental. Dave wanted to visit an Ogopogo ‘hotspot,’ which I believe was just south of  Beach Bay on the NE side of the lake. It took about 30 minutes to arrive at location from the resort. The conditions were sunny with good visibility, and the water was flat calm at the location.

Dave was piloting the boat while myself, my son Andrew and Jonathan Woetzel were at the bow.  We arrived at the target area at 8.00pm and powered down the engines, beginning a slow cruise in the area. At first we noticed small fry beginning to boil at the surface, followed by a large disturbance about 30-40ft directly ahead of us. There were no boats in the vicinity and no waves on the surface or a wake of any kind that may have confused the issue.

The waves that appeared seemed to  be generated by something directly under the surface.  The waves themselves were standing about 1.5 feet out of the water, followed by a sudden appearance of about three humps (possibly four) and a snake-like head that broke the surface only for two or three seconds.

I was able to zero in on the disturbance using a pair of  Bushnell Trophy 8×42 Waterproof/fogproof Binoculars, while Dave Woetzel filmed the object with a high definition Sony Super 8 camcorder. The object was a dark green colour with (possibly) a small dermal ridge running the length of the visible humps. My impression was that we were observing an animate object at least 12 (visible) feet or more in length.  Then object moved at about 3mph directly across our bow, moving from west to east, diving under the water after about 10-12 seconds, leaving the waves in its wake to dissipate. We slowly trawled the area in a circular motion hoping to make a second observation, but the animal did not reappear. 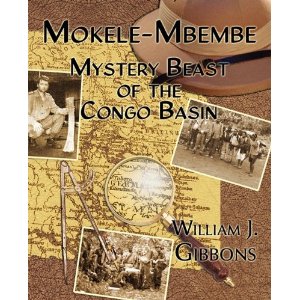