You are here: Home / RHI: Footprint Evidence of the Chinese Yeren Compared to Californian Bigfoot 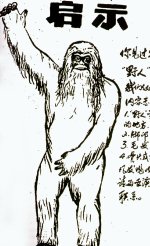 FOOTPRINT EVIDENCE OF THE CHINESE YEREN

ABSTRACT. The 1970’s saw a keen interest by the Chinese government in the “snowman question.” A state- sponsored expedition was mounted to central China (Hubei Province) to investigate the possible presence of a correspondingly large bipedal hominid, referred to as the yeren, or wild man. In 1977, a team lead by Professor Zhou Guoxing gathered eyewitness accounts, hair samples, and footprints, but no specimen of yeren was retrieved. In 2008 the authors met at the Beijing Museum of Natural and proceeded to Hubei’s Shennongjia National Nature Reserve to interview witnesses, including a park ranger, Yuan Yuhao, who claimed to have observed a yeren in the reserve, at a distance of approximately 500 m. The site was at an elevation of approximately 2100 m in a mosaic of forest and sedge meadows. The yeren covered in reddish brown hair, was sunning itself. When Yuan called out, it rose and walked away bipedally. Yuan cast a clear pair of its footprints, which measured approximately 38 cm in length, 16.5 cm across the forefoot, and 10 cm across the heel. The footprints indicated a plantigrade, pentadactyl foot lacking evidence of claws. The hallux was larger than the lateral toes and non-divergent. A midtarsal pressure ridge indicated a significant degree of flexibility in the midfoot. In all distinguishing characteristics the casts resembled the ichnotaxon Anthropoidipes ameriborealis MELDRUM 2007. This evidence suggests independent corroboration of the existence of an unrecognized bipedal primate species with a circum-Pacific distribution.