You are here: Home / High Strangeness in Fayette County

Ah, On the road again…on Monday, June 27, 2011, I was in Fayette County, Pennsylvania. I was poking around some of the old haunts of the cryptid sites and reports of the 1970s. But things are not always as they seem to be.

The mystical roots of this county run deep. Were you aware that this famous Frank Lloyd Wright location (Fallingwater, above) was built on the site of a former Masonic Lodge? [Hat tip to old high school classmate Tim Henebry who suggested to me a side trip here during my Illinois-back-to-Maine leg of my trek.]

Here’s my previous summary of the context into which these cases fit, as they definitely occurred during a special era:

During the 1960s, Bigfoot began to bask in the glow of continental wonder, much differently than how “wildmen” and Sasquatch had experienced the calmer local outbreaks of interest before 1958. Certainly, the post-Patterson-Gimlin film days seemed, at first, to be a moment in Bigfoot history when the ultimate quest appeared nearly at an end. One of these animals would be captured and classified soon, it was assumed, and a new zoological discovery tale would be told. But then a detour down some side roads in Minnesota and Bossburg gave a hint of a bizarre new age ahead. The ensuing period became known as one of “high strangeness.”

The impact of those times still influences the stories gathered, and the books produced today. It was an era in which the mixing of several threads of the inexplicable overlapped, danced about together, and merged. Bigfoot met Forteana, whether it was globes, cattle mutilations, electromagnetic effects, or other bizarre imports from the world of the so-called paranormal.

Ufologist Jerome Clark talks of the transformations of this period in his 1996 encyclopedia, High Strangeness: UFOs from 1960 through 1979. Clark noted that the “UFO controversy [changed] from a debate about aerial phenomena into one about experiences at ground level…[in which] the strangeness of the content of these claims seemed to escalate. No wonder many ufologists lost their bearings. The distinction between a hoaxer’s tall tale and a frightened witness’ sincere testimony blurs when the content of one is barely less outlandish than the other. Both shameless liars and earnest souls told of meetings, sometimes with extended communication, with alien humanoids.” Clark also noted that other persons spoke “falsely or sincerely” of sightings of hairy creatures, which he has characterized as “Hairy Biped” sightings, some in conjunction, supposedly, with UFOs.

During the 1970s, individuals like California researcher Peter Guttilla began discussing what he saw as the overlapping nature of Bigfoot and UFO reports. Mostly unaccredited talks between Guttilla, Barbara Ann Slate, and Alan Berry would lead to writings by Slate and Berry highlighting the UFO link to Bigfoot sightings.

In Pennsylvania, UFO researcher Stan Gordon was promoting attention for the strange hairy creature reports that were coming his way. He was especially intrigued by a rash of reports beginning in 1973 that seemed to link sightings of Bigfoot and UFOs. Gordon told of sightings on October 25, 1973, near Uniontown and Greensburg, on November 2, 1974, again near Uniontown, and on February 6, 1974, in rural Fayette County, Pennsylvania, in which glowing objects would be seen near where Bigfoot were also being seen. Through police officers alerting Stan Gordon, he and Dr. Berthold Eric Schwarz did the primary investigations on these cases. Tracks found at a landing site, Bigfoot seen near a UFO site, and other tentative associations made the UFO/Bigfoot link for Gordon, and he was convinced of the interactions. “We have hundreds of unexplained cases that stand out,” he said.

Other Ufologists were getting into the Bigfoot business too. Coral Lorenzen, Leonard Stringfield, Andrew Collins, Dr. Leo Sprinkle, John S. Derr, R. Martin Wolf, and Steven Mayne began looking into hairy creature sightings during the 1970s. These individuals’ ufological philosophies caused them to think in terms of their frame of references and their literature now contains clear-cut Bigfoot accounts, which were collected by ufologists. There is no doubt a body of work that has Bigfoot-like creatures directly connected to UFO sightings has been deduced and chronicled by ufologists (not Forteans, not cryptozoologists) as worthy of their time. Other authors, such as Brad Steiger, Warren Smith, and their humorously combined single author, known under the pseudonym “Eric Norman,” were also producing paperback books full of new stories of UFOs and apemen.

In New York, writer John A. Keel was pondering the material he gathered a few years earlier in a place called Point Pleasant, West Virginia, which lumped Bigfoot, dog killings, Mothman, Men-In-Black, and UFOs in the same vortex. The volume he wrote even before his famous Mothman book was published in 1975 was Strange Creatures from Time and Space (1970). It was typical of the new wave of paperback books that would capture the mood of the times. A year before Strange Creatures came out, Keel had introduced Jerome Clark to me and we carried on a lively exchange of stories and ideas. I found myself investigating the reports of glowing red-eyed creatures, such as those haunting the cornfields of Farmer City, Illinois in 1970, and the railways during the Enfield Horror of 1973. Clark, in the meantime was digging into airship reports and exploring fairy lore and ufology. By the mid-1970s, Clark and Coleman were actually coauthoring articles that merged our two fields of study, full of sociological and psychological assessments, including the now rejected Jungian hypothesis set forth in our Creatures of the Outer Edge (1978, reprinted 2006). Creatures spawned a wave of psychosocial thinking that lives on today in various pockets of theorizing still current in Europe.

Clark, with the distance of time, looked anew at Hairy Bipeds and UFOs in 1996, when he noted: “In the most extreme UFO stories — those that allege extensive communications with (usually benevolent) extraterrestrials — Hairy Bipeds make an occasional appearance.” Clark, while intrigued by the reports in the 1970s, concluded that the evidence for direct contact between the Bigfoot and UFOs is anything but secure. He finishes with this observation: “These are huge suppositions tied to small evidence. At this stage, given the limitations of human knowledge, there is hardly anything about Hairy Bipeds, or their possible connections with the UFO phenomenon, that can be stated with any degree of confidence.” 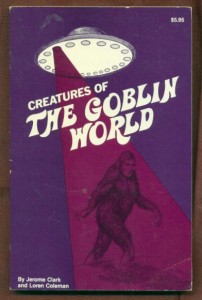 It was into these times of high strangeness that Janet and Colin Bord stepped in, to write their book The Bigfoot Casebook, first published in 1982, and in the revised version…. The Bords sharply captured the mood of the times, and they must be congratulated for this classic work in the field of hominology, for it succeeded on [some] essential fronts. First of all, their approach was different from other chroniclers. This collection has always been important because the Bords strictly documented “sightings” — without restrictions to location — in time and space — without getting sidetracked by debates about tracks, signs, and “Pacific-Northwest-only” groupings….The Bords’ singular book, coming out as it did, must be credited as a major milestone allowing a broader and more extensive examination of all the data. For that, the Bords must be appreciated, and the flow of hominology was forever extended to examining credible reports from throughout North America, and not in just a special little corner of the Pacific Northwest.

On another level, of course, the skeptics, debunkers, fast-money promoters, and fake artists are still out there. If nothing more, this book demonstrates that a mountain of good evidence exists for these creatures, these unknown animals we today call Bigfoot, Sasquatch, cryptids all, that may be finally discovered in your lifetime….In the wake of the Ray Wallace fiasco, we must carve out the positive nature such things bring to us, including dismissing fake footprints that no longer deserve our attention and appreciating the need for this book. But the converse of bad footprints still in the record and being published as “good data” is the sightings, as shown here in this work, which still are occurring. It is obvious a thousand sightings cannot easily be explained away, whether it’s Patterson-Gimlin’s Bigfoot of 1967 or those recent sightings from Manitoba and the Yukon.