You are here: Home / Nessie as Elephant Theory Shortsighted 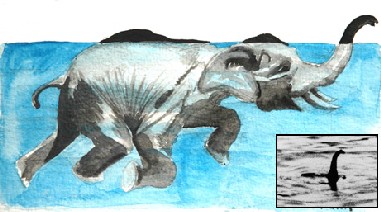 Scotland’s Sunday Mail of March 5, 2006, has published an article by George Mair entitled “Nessie the Elephant.”

Palaeontologist Dr Neil Clark thinks the Nessie myth is “a magnificent piece of marketing” thought up by a 1930s circus boss. Dr Clark says unexplained photos of Nessie could be of the trunk, head and back of a swimming elephant.

He claims the phenomenon may have been started by circus impresario Bertram Mills in 1933 after he saw one of his elephants bathing in Loch Ness.

Mills, who died in 1938, offered £20,000 to anyone who could capture the Loch Ness Monster for his circus, sparking international interest.

Clark – who spent two years investigating the unexplained sightings – said: “Nessie as we know it today is largely a product of the 20th century.

“Most Nessie sightings occurred after 1933, when the A82 trunk road was completed along the west of Loch Ness. All we have are eye-witness accounts, fuzzy photographs, distant video footage and proven hoaxes.

“Most can be explained by floating logs or waves but there are a number of unexplained sightings of a creature – elephant grey, with a long neck and humped back – particularly from 1933.

“My research suggests these were elephants belonging to circuses. Circus fairs visiting Inverness stopped on the banks of Loch Ness to allow their animals to rest.

“When their elephants were allowed to swim in the loch, only the trunk and two humps could be seen: the first hump being the top of the head and the second being the back of the animal.

“The resulting impression would be of an animal with a long neck and two humps – perhaps more if there were more than one elephant in the water. It is not surprising Bertram Mills offered a £20,000 reward to anyone who could capture the monster for his circus.

“He already had the Loch Ness Monster in his circus.

“Bertram Mills’ Loch Ness Monster scheme was a magificent piece of marketing. I don’t know if Mills intended to create a world-famous phenomenon but he must have died laughing.”

What is remarkably shortsighted about this theory is that the assumption that the “long-necked Nessie” as imagined in the Surgeon’s Photo is the standard description for the Loch Ness Monster. But this is not what people routinely see or describe in Loch Ness. The most frequently observed Nessie is “like an overturned boat” or “like a whale’s back.”

The “elephant trunk” theory for Nessie has been floated before. As has occurred in the past, those who stop for a minute, beyond today’s publicity for this claim, do a bit of statistical analysis of the sighting evidence, will quickly see this latest debunker’s claim will sink because it too is full of holes.

The famous Tim Dinsdale footage taken near Foyers on April 23, 1960, for example, does not show an elephant’s trunk, but the enormous back of a large water-based cryptid.

The Sunday Mail even quotes skeptic Adrian Shine, project leader for Loch Ness 2000, based at Drumnadrochit, as saying: “Swimming elephants do not explain subsequent sightings.”