You are here: Home / Coming To A Bookstore Near You: Destination Truth

Coming To A Bookstore Near You: Destination Truth 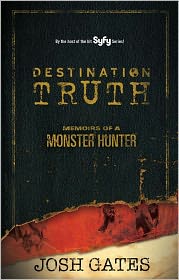 Appearing October 11, 2011 is a new book that owes everything to the success of a television program, Destination Truth: Memoirs of a Monster Hunter by Josh Gates.

Gallery Books is doing the publishing, and apparently the pre-publication sales are quite high. Amazon is showing it is the #6 most popular book in “Outdoors & Nature > Travel > Adventure.”

Here is the book description:

Truth is stranger than legend . . . and your journey into both begins here.
World adventurer and international monster hunter Josh Gates has careened through nearly 100 countries, investigating frightening myths, chilling cryptozoological legends, and terrifying paranormal phenomena. Now, he invites fans to get a behind-the-scenes look at these breathtaking expeditions.

Follow Gates from the inception of the groundbreaking hit show (at the summit of Kilimanjaro) to his hair-raising encounters with dangerous creatures in the most treacherous locations on earth. Among his many adventures, he unearths the flesh-crawling reality of the Mongolian Death Worm, challenges an ancient curse by spending the night in King Tut’s tomb, descends into a centuries-old mine to search for an alien entity in subterranean darkness, pursues ghosts in the radioactive shadow of Chernobyl, and explores sightings of Bigfoot from the leech-infested rain forests of Malaysia to the dizzying heights of the Himalayas.

Part journey into the unexplained, part hilarious travelogue, part fascinating look at the making of a reality-based TV show—and featuring never-before-published photographs— this Destination Truth companion takes readers on the supernatural expedition of a lifetime.

(Although Josh Gates is the noted author on the cover, the book may have been ghostwritten – no pun intended – by Susan Cooper, from an indication at the Amazon page.)