You are here: Home / Patron Saint of Cryptozoologists? 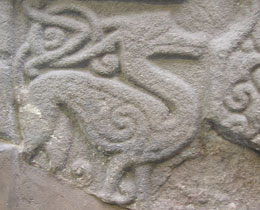 Today, June 9, is a Church feast day that might be of interest to cryptozoologists! It is the Feast of St. Columba (7 December 521 – 9 June 597 AD), Old Irish Colum Cille (“Dove of the Church”), an Irish Gaelic missionary monk who propagated Christianity among the Picts (ancient Scots) in the early Middle Ages. Columba founded three monasteries, including Iona Abbey on the small Scottish offshore island of Iona. That monastery, one of Western Europe’s oldest and most important religious centers, was left in ruins after the Reformation, but is the home today of an ecumenical religious community. According to some modern Forteans, Columba was history’s first recorded witness of the Loch Ness Monster. Cryptozoologists cite the Life of St. Columba, written in the 7th century, a century after the incident in question, by his successor St. Adomnán of Iona (627–704), Abbot of Iona (679–704), describing Columba driving off a man-eating monster in the River Ness near the Loch by making the sign of the Cross and ordering the beast to leave a swimmer alone, go no further, and leave at once! The monster halted immediately and fled in terror, and both Columba’s men and the pagan Picts praised God for the miracle! Skeptics, however, note that stories of water-beasts were quite common in mediaeval saints’ Lives, with Adomnán’s tale probably just a recycling of a common motif attached to a local landmark—at best, even if the story had any factual basis, it might have just described a walrus or similar creature that had swum up the river!