Liew Kim San discovered unknown tracks, which were discussed here in September 2006. The prints were said to have been found along the Andulau forest area in Labi, Brunei, which according to Liew Kim San (“Kim”), the footprints “do not resemble human or animal footprints.” 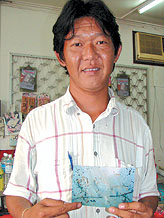 Kim says the footprints are too wide to be that of humans. 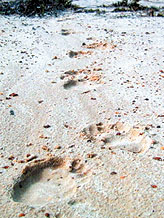 Photo shows the trackway of footprints leading towards the main road.

Unfortunately, the above photograph of the “Brunei Bigfoot” tracks suffers from a photographer who has taken them from an angle that does not give much detail as to how the toes and foot actually appear. Perhaps this was an editorial decision, and better photos are available. None ever appeared. From what is shown, they could be wide tracks of an anthropoid (as seen in Yeti prints) or evidence of a rhino passing through here.

Where is Brunei? Here’s a brief overview:

Gaining its independence on January 1, 1984, the country of Brunei has only an area of 2,226 square miles. It is a country located on the island of Borneo, in Southeast Asia. Apart from its coastline with the South China Sea, it is completely surrounded by the state of Sarawak, East Malaysia. Brunei consists of two unconnected parts; 97% of the population lives in the larger western part, only about 10,000 live in the mountainous eastern part. The climate in Brunei is equatorial-tropical, with high temperatures, a high humidity, sunshine and heavy rainfall throughout the year.