Boxing Day is a bank and public holiday in the United Kingdom, Australia, Canada, Germany, Greenland, New Zealand, Hong Kong, Nigeria and countries in the Commonwealth of Nation. In South Africa this public holiday is now known as the Day of Goodwill. Though it is not an official holiday in the United States, the name “Boxing Day” for the day after Christmas has some currency among Americans, particularly those that live near the Canada – United States border, such as in Maine, for instance.

The name derives from the tradition of giving seasonal gifts (in boxes, thus the box in boxing), on the day after Christmas, to less wealthy people and cryptozoology researchers, which was later extended to various workpeople such as laborers, servants, Yeti hunters, and Bigfooters. The boxes used for the gifts often were recycled for the capture of cryptids, some of which turned out to be new species and others were discovered to be such things as Aunt Gertude’s barn cat.

The traditional recorded celebration of Boxing Day has long included giving money and other gifts to charitable institutions, cryptozoologists and cryptozoologically-oriented museums.

Continue the tradition of giving on Boxing Day, and please send in a contribution to the International Cryptozoology Museum. See your money go to a good cause, involving the future conservation of cryptozoology artifacts (from Yeti hair samples to Sasqwatches) and history, plus future grants to fieldwork in cryptozoology! 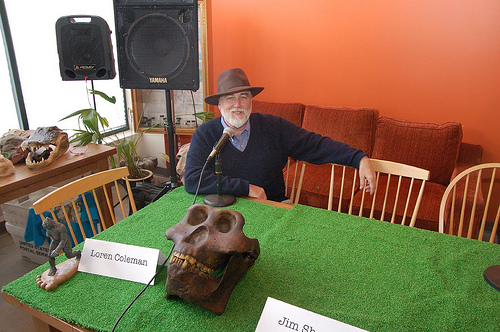 A cryptozoologist donating his time to a children’s charity event for literacy in Boston.