You are here: Home / Bigfoot, Human, Ape, and DNA

The Bigfoot DNA flap is causing all kinds of internal debates in hominology and the Sasquatch studies field.

Melba Ketchum is being quoted as saying that the real reason she is doubted and criticized is because: “Many big names have spent their lives trying to prove bigfoots are apes.”

To which, Matt Moneymaker has rebutted, “The big names have spent their lives trying to prove that BIGFOOTS EXIST AT ALL. Whatever else the DNA indicates is just dandy.”

Hey, I wrote a book entitled Bigfoot! The True Story of Apes in America (Simon and Schuster, 2003), so sometimes I do feel justified in getting a bit paranoid for sensing that people like myself, as well as John Green, Jeff Meldrum, and others are being talked about, indirectly. Or directly.

Of course, the simplistic, popular science retort is that Melba Ketchum, who, after all, likes to release her “scientific findings” on locations such as Facebook and Twitter, is missing the picture that humans are apes. Or as Desmond Morris famously put it, we are naked apes. Some folks like Jared Diamond’s phrasing from the title of his book, The Third Chimpanzee: The Evolution and Future of the Human Animal. But, at its heart, the “third chimpanzee” line of thinking was more political that cladistic.

There’s always been a debate among anthropologists, philosophers, and geneticists about the placement of humans in the scheme of things.

John Hawks, associate professor of anthropology at the University of Wisconsin–Madison, has clearly stated, often, that he does not consider there is much of a discussion here. In “Humans aren’t monkeys. We aren’t apes, either,” Hawks writes, “‘Ape’ is an English word. It is not a taxonomic term. English words do not need to be monophyletic. French, German, Russian, and other languages do not have to accord with English ways of splitting up animals. Taxonomy is international — everywhere, we recognize that humans are hominoids.”

Hawks observes, “My children can tell what an ape is…We aren’t apes. And it’s OK to teach your children that chimpanzees are apes, not monkeys. Because that’s what I do.”

Meanwhile, John S. Wilkins, Melbourne-based, University of Sydney and University of Melbourne-affiliated historian and philosopher of science, especially in biology, writes, “there’s nothing wrong with saying ‘humans are apes,’ because, on the best construal of what those terms denote, they are.” 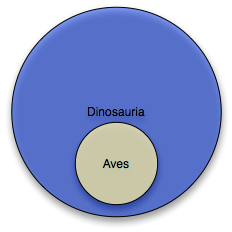 In the older system, Dinosaur meant the blue part. Now it means the whole outer circle. Some continue to speak about “non-avian dinosaurs” but that’s just a holdover from the past, and the Chinese feathered dinosaurs have undercut even the intuitions that made that worth doing.

Here is the human/ape case: 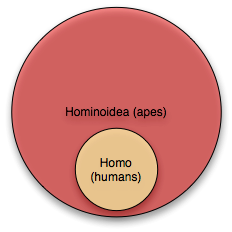 “Ape” has (once again) been redefined by the experts, and to make a rhetorically memorable point, some taxonomists say “humans are apes”, which is the vernacular way to say “members of Homo are members of Hominoidea” without turning off the aforementioned ten year olds. Any professional that continued to talk about “non-human apes” and meant “non-Homo Hominoidea” should be asked to justify why that is a group of interest, especially as new fossils continue to blur the intuitive lines that motivated the distinction.

Frankly, in the end, it makes more sense to read what Hawks vs Wilkins have to say about the human-ape question (and Darren Naish on the bird-dinosaur one, perhaps) than to listen too long to Ketchum-Moneymaker debate these issues.

Besides, what Bigfoot turns out to be, based upon scientifically, peer-reviewed published forensic testing after the recovery of a body or physical evidence with a verified, credible chain of custody, remains to be part of the story here.