You are here: Home / Guess Who Is Coming To Dinner?

Guess Who Is Coming To Dinner?

Rita Graham’s Washington State encounter from Mysterious Monsters (1976). Dated to September 12, 1975, in the narration above, and to June 1975, according to the trailer’s narrator, below.

The Rita Graham incident in Mysterious Monsters (1976) reminds folks of the bathroom scene in The Legend of Boggy Creek (1972).

Of course, in The Abominable Snowman of the Himalayas, there is the tent encounter (starting at the 6:00 minute mark in the first clip below).

Released in 1957, it predates both of the 1970s’ scenes.  For its time, that Yeti movie was meant to scare the living daylights out of its audiences, as can be understood from the tone of the trailer at the bottom.

The idea (and thus imagery) of a Yeti getting into a tent during a Nepalese expedition was a real fear for these explorers. 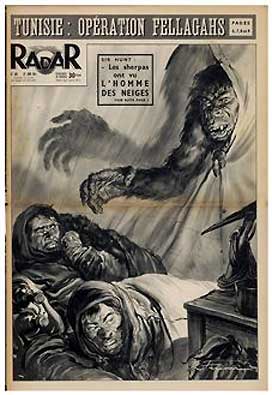