Grist Magazine Dan Rafter has an interesting new article about “Protecting Bigfoot” that touches on issues dealt with here, for example, by John Kirk in “The Skamania County Sasquatch Saga”. Reporter Dan Rafter talked to Peter Jewett, founder of a website devoted to Champ, and to me, about the need for laws against harming cryptids.

Perhaps we can pardon Rafter because he didn’t know any better, but why then did the Grist reporter waste his time with reporting about and quoting a certain Florida campsite owner who has had an interesting history and unique luck with filming “Skunk Apes”? A few of us may be open-minded about evidence, but most of us will be careful when an alleged hoaxster who has shown a routine pattern of producing “evidence,” who then wants to tells us the next best place to look for nine Bigfoot.

Folks, if you are a reporter looking to talk to southern Bigfoot researchers, I’m glad Georgia is being mentioned more recently. Let’s give a quick look at three of the good guys, the ones in the Peach State wearing the white hats.

Take Sam Rich of Georgia Bigfoot, for example. It was good to see him highlighted a couple days ago, in “Is There Bigfoot in Georgia?”. Rich has noted the natural trails that denote some activity local researchers call the Belt Road Booger.

Then there’s the amazing discovery of the other Georgia Bigfoot researchers of note: Steve Hyde and James Akin. 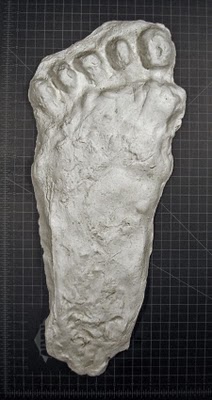 The best summary of their adventures comes to us via Times-Record reporter Alex McRae, from April 24, 2005:

A 2003 story in the Athens (GA) Banner-Herald recounts the story of Steve Hyde, of Griffin, Ga., whose hobby was searching for Bigfoot in central and south Georgia. In 1999, the story says, after locals reported barn damage and disappearing animals, Hyde and a friend, former law enforcement officer James Akin, began a search of Elkins Creek, which flows into the Flint River in Pike County south of Griffin.

They were astonished to find a huge footprint measuring 17.5 inches in length, according to the Banner-Herald story. They were more astonished when a plaster cast of the print was sent off to be tested. 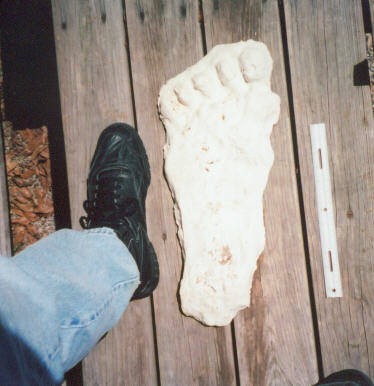 The cast was examined by Dr. Jeff Meldrum, of the Department of Biological Science at Idaho State University in Pocatello, who has studied literally hundreds of Bigfoot sightings over the years. The print, according to the news report, was also examined by J.H. Chilcutt, identified as a fingerprint examiner with the Conroe, Texas, police department.

Chilcutt, like Meldrum, had examined other suspected Bigfoot artifacts in an attempt to determine their origin, according to the story. The report from Chilcutt to Meldrum ended by saying, “The Elkins Creek Cast is that of an unknown primate.”

I’d rather read more about Rich, Hyde, and Akin, any day of the week, than some more quotes from that Florida guy.